Across the G10 space, weekly implied volatility has been notable within the commodity linked currencies (AUD & NZD). However, with market holidays in Japan, China and Europe, FX volatility is relatively subdued, which raises the risk that volatility may be somewhat under-priced, particularly given the upcoming tier 1 data and central bank rate decisions from the Fed and BoE. 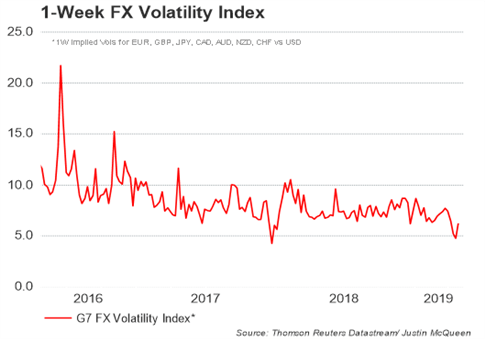 GBPUSD: A busy week for the GBP with local elections likely to see support for the conservative party take a bashing given their inability to make progress on Brexit. Perhaps what will be more interesting and could spark a sizeable reaction in the Pound is the BoE’s monetary policy meeting. Particularly with regard to their view on the continued strength in the UK labour market and pick up in wages growth. Recent press reports have highlighted that this could prompt a rate setter (Possibly Saunders) to call for a hike, which if that was to materialise, this could provide spark a hawkish bid in the Pound. Elsewhere, PMI data will also garner attention, most notably the Services PMI, which is hovers in contractionary territory. Failure to move back into expansionary could see the Pound on the back-foot with 1.29 support tested. Implied move for the week is at 87pips.

AUDUSD & NZDUSD: Since the weak inflation reports from both Australia and New Zealand, implied volatility has picked up, while rate cut bets have also kept the Antipodean currencies under pressure. This week will see the release of the NZ jobs report, in which a soft report (a rise in the unemployment rate) would likely raise the material risk that there could be a rate cut at the May 8th meeting, as it stands, money markets attach a 40% likelihood of a 25bps rate cut. Alongside this, risk reversal continues to show greater demand for NZD puts over calls.

USDTRY: Last week saw the Turkish Lira come under significant pressure after the Turkish Central Bank removed its pledge for “further tightening if needed”, which places the central bank in a tricky situation. Inflation continues to hover around 20%, the Turkish Lira has weakened over 9% since the beginning of the month while oil prices have risen over 5%, which in turn keeps inflation risks tilted to the upside. With implied volatility remaining elevated and investors continuing to seek demand for USDTRY calls, a 6.00 is the near future is quite possible. 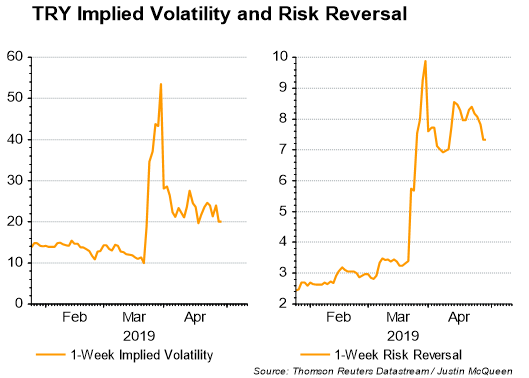