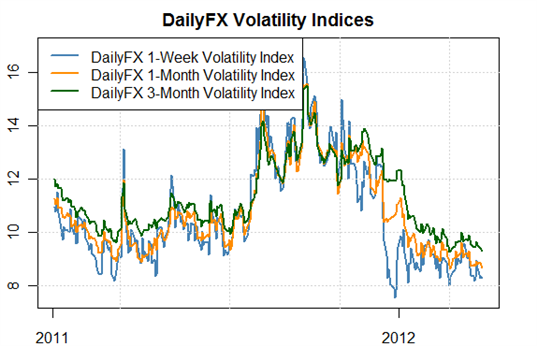 The Australian Dollar and British Pound may continue to fall against the US Dollar (ticker: USDOLLAR) as traders unwind extremely long positioning. A relatively bullish view on the Euro may favor Euro/Australian Dollar long trades.

FX Options traders are at or near their most bullish Euro, Australian Dollar, and British Pound in quite some time. Such one-sided sentiment has often preceded major rallies for the EURUSD, but similar levels have coincided with important GBPUSD tops dating back to multi-year highs of $1.7000 set in 2009.

The Australian Dollar may fall further as traders begin to unwind a heavily net-long AUDUSD speculative position. It has been difficult to get a handle on US Dollar direction, however, as the Dow Jones FXCM Dollar Index trades in a broadly directionless range. A relatively bullish Euro forecast and bearish Aussie outlook suggests the EURAUD could continue higher through upcoming trade. 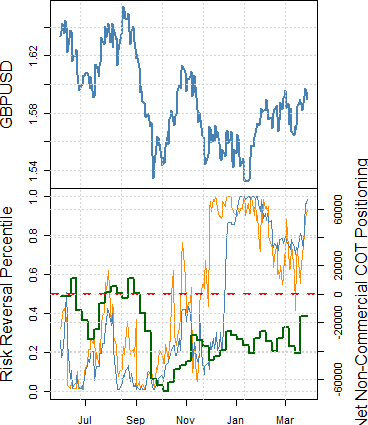 The British Pound may fail against critical resistance of $1.6000 against the US Dollar as current FX options sentiment has produced a number of important GBPUSD tops dating back to 2009.

FX Options traders are their most bullish GBPUSD since the pair traded near $1.5800 and set a short-term top of $1.5900 through earlier this month. Prior to this year, we hadn’t seen such bullishness since the GBPUSD set a longer-term top near $1.7000 in August, 2009.

Does this guarantee that the GBP will reject $1.60 once again? Absolutely not. Yet continued failure at this level and consistently net-short speculative futures positioning suggests “smart money” is positioned for further British Pound weakness. We would need to see a substantive break to change our generally bearish GBPUSD bias. 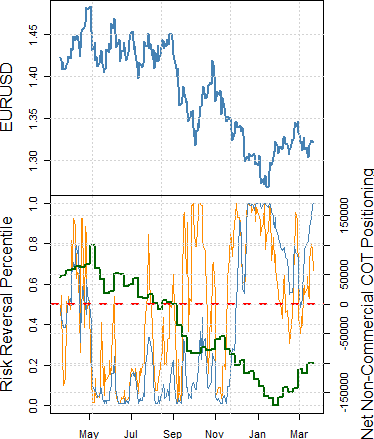 Sharp moves in Euro/US Dollar positioning suggest the Euro could continue to trade higher against the USD.

FX Options traders are near their most bullish the Euro against the US Dollar since the EURUSD traded toward $1.48 in April of last year. CFTC Commitment of Traders data likewise shows that Non-commercial traders—large speculators—are their least short Euro since November.

The Euro nonetheless trades nearly unchanged through March and has thus far shown little willingness to make a sustained move towards $1.35. The beginning of the month can quite often bring a new trend, and we indeed may wait until the first full week of April trading before calling for a bigger rally. 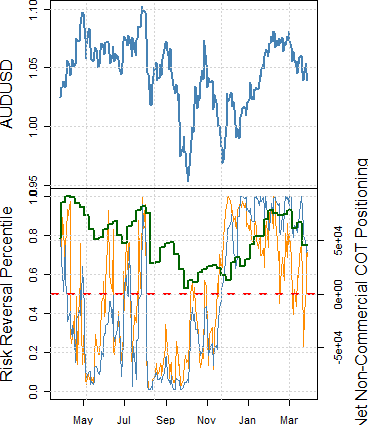 Already we see that the AUDUSD has pulled back significantly, and a break of 1.0340 targets a move towards 1.0200. Given a comparatively bullish Euro outlook and an otherwise directionless US Dollar, this author favors a position on Euro/Australian Dollar higher through the foreseeable future.