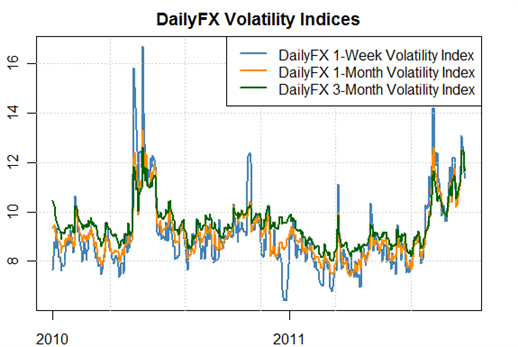 Indeed, FX Options risk reversals are the most bullish US Dollar against the Euro, Canadian Dollar, Swiss Franc, Australian Dollar, and New Zealand Dollar in quite some time. Clearly this shows that most are positioned for continued USD gains. Yet that likewise tells us that few traders are left to buy into US Dollar strength and a correction is increasingly likely.

Currency pairs tend to make their monthly highs and lows at the end and beginning of each month. Such a dynamic suggests we could see the US Dollar continue to rally into the end of September and see a larger pullback as we go into October. And though risk/reward may favor USD-long positions in the short-term, be wary of the potential of a bigger pullback. 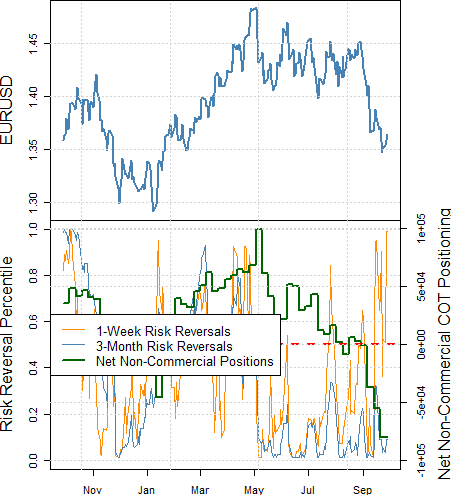 Euro options sentiment and futures positioning shows that traders have grown strongly bearish the EURUSD. FX Options risk reversals remain near their most EUR-bearish since at least 7 years, warning that the pair may be near a significant bearish sentiment extreme. Yet we have and will continue to warn that sentiment can remain extreme for extended periods of time, and overall momentum seems to favor further EURUSD weakness.

FXCM’s Speculative Sentiment Index is relatively neutral at 1.1 traders long for every short. We may need to wait for short-term resolution before taking a stronger stance on the Euro/US Dollar. 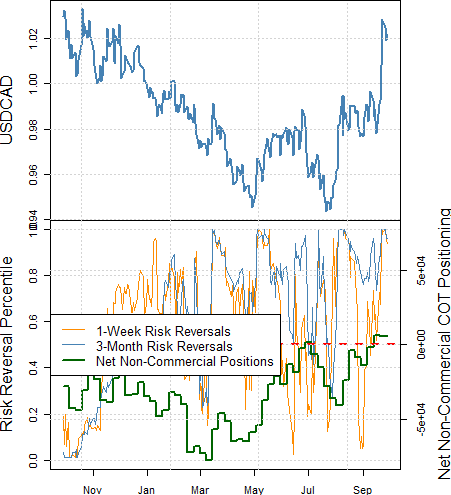 USDCAD FX Options sentiment is now at its most bullish on record (7 years), emphasizing that market bias has clearly shifted in favor of continued strength. Forex futures positioning shows traders flipped net-long USDCAD for the first time since July, and the last time traders were this net-bullish USDCAD was when it traded near the C$1.18 mark in May, 2009.

Suffice it to say, trader sentiment favors continued USDCAD rallies. This hardly rules out short-term weakness, but the turn in positioning points to a run at further highs. 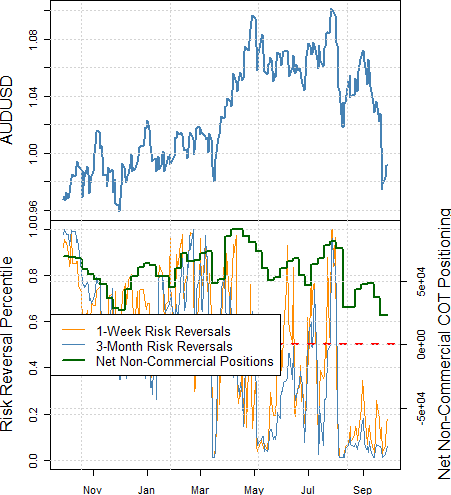 Australian Dollar risk reversals are now at their most bearish since the pair set a significant bottom near the $0.60 mark in early 2008, warning of a potential bearish sentiment extreme. Futures traders have similarly pared bets on AUDUSD strength, and there are increased risks that the pair could soon set an important bottom.

We consistently warn that sentiment extremes are only clear in hindsight. Yet it is difficult to ignore such extremely one-sided options sentiment, and traders should remain cautious amidst heightened risks of an AUDUSD bounce. 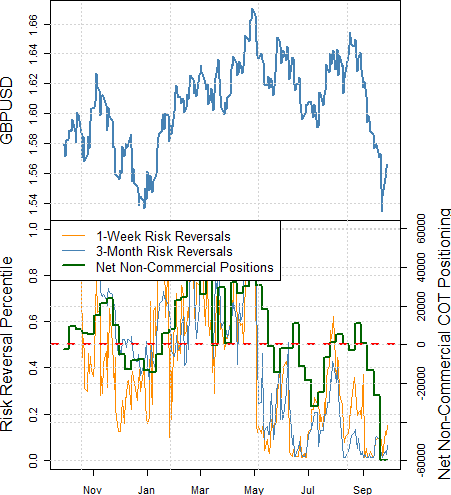 Much like in other US Dollar pairs, there is considerable risk that the British Pound has set an important short-term sentiment extreme. FX Options risk reversals are currently near their most bearish since the pair set a significant low near the 1.45 mark through early 2010. CFTC Commitment of Traders data likewise shows that Non-commercial traders are at their most bearish since the same market bottom.

There’s real risk that we turn around near these levels, but that does not rule out a further short-term low. If the sell-off across financial markets continues, expect to see fresh GBPUSD lows. 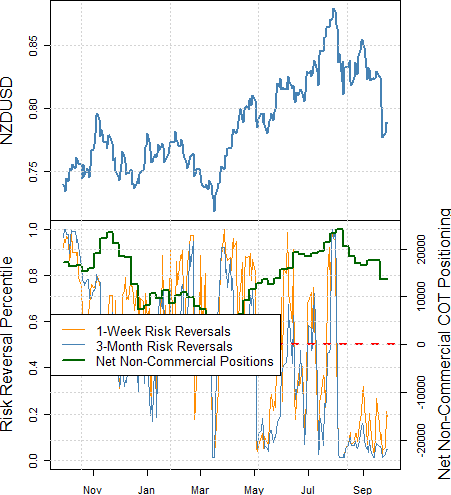 The New Zealand dollar remains in an unsurprisingly similar position as that of the Australian Dollar. NZDUSD options sentiment is now near its most bearish since the pair set a significant bottom near $0.65 in early 2010. Yet it remains worth noting that speculative futures positioning shows traders are fairly net-long. The large discrepancy suggests that there may be further room to the downside if and when speculators unwind long positions.

As with other USD pairs, our preference is for a fresh NZDUSD low before we see a more significant correction. 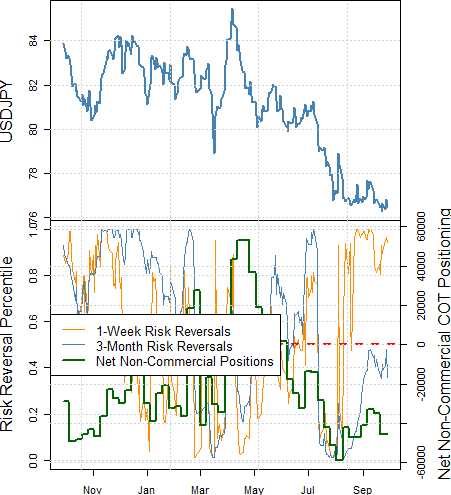 The USDJPY has shown very mixed sentiment readings as of late, refusing to break significantly below recent lows despite clear downward momentum. We recently pointed out that CFTC Commitment of Traders data recently showed Non-commercial traders near their most JPY-bullish extreme (USDJPY-bearish) since the pair set an important bottom in 2008. That gave contrarian signal that the USDJPY could set an important bottom, but we’ve seen little evidence of such.

It is always critical to note that sentiment extremes are only clear in hindsight. In theory the bullish shift in risk reversals and one-sided futures positioning should support near-term USDJPY strength. Yet the pair could see further lows before any important reversal. 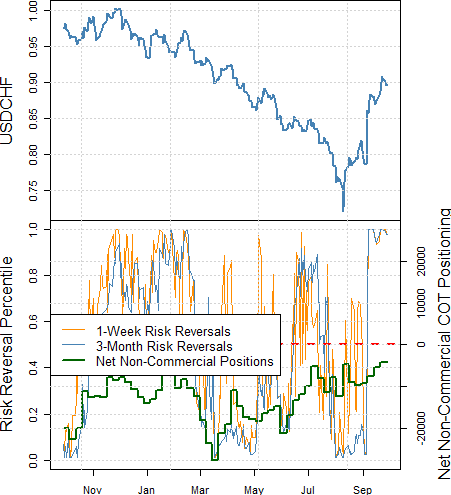 The recent US Dollar surge against the Swiss Franc confirmed our previous bullish bias, and FX Options risk reversals are now near the most bullish USDCHF on record.

Speculative futures positioning is surprisingly still net-short the USDCHF, but overall risks seem to have shifted in balance of US Dollar strength and Swiss Franc weakness. Our broader outlook for the USDCHF is subsequently bullish.