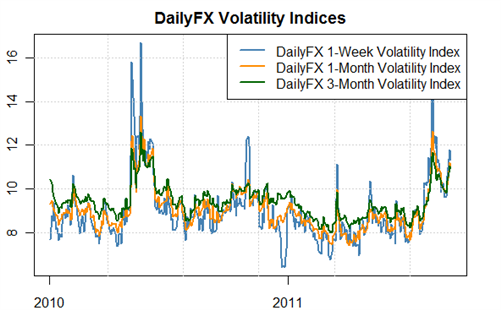 FX Options risk reversals are now their most bearish EURUSD in at least 7 years, and such extremely one-sided sentiment has frequently coincided with noteworthy short-term bottoms. Past performance is clearly no guarantee of future results, but recent history warns that the EURUSD could see at least a modest bounce.

We likewise see noteworthy sentiment and positioning levels in the US Dollar/Japanese Yen pair, which may have set a significant bottom through recent trade. Overall US Dollar risks seem mixed, but outlook for the Euro/Japanese Yen pair has suddenly turned quite bullish. 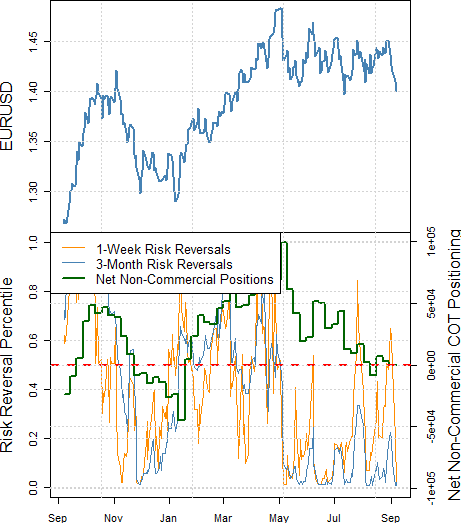 EURUSD FX Options Risk Reversals are now at their most bearish in at least 7 years, showing clear warning that the pair may be at an important short-term bearish extreme. Indeed, such tumbles in the 3-month risk reversals have accurately caught short-term bottoms frequently in the past several months of trading. And though the standard disclaimer applies—past performance is no guarantee of future results—it does increase the odds of a short-term EURUSD bounce. 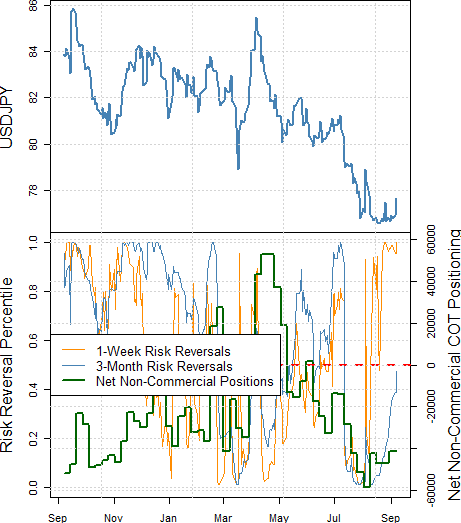 We have started to see early signs of a significant US Dollar/Japanese Yen bottom, and indeed there are real risks that the USDJPY may continue higher through upcoming trade. CFTC Commitment of Traders data recently showed Non-commercial traders near their most JPY-bullish extreme (USDJPY-bearish) since the pair set an important bottom in 2008.

It is always critical to note that sentiment extremes are only clear in hindsight. Yet the recent surge in risk reversals and bounce in the USDJPY suggests the pair may be setting an important medium-term bottom. 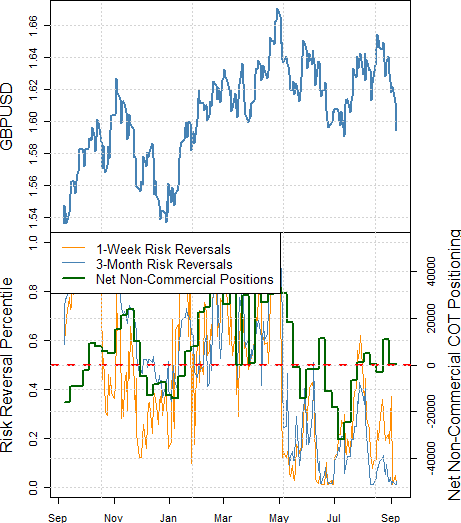 Sharp declines in GBPUSD risk reversals warn that sentiment may have turned on the recently range-bound pair. Options traders are now at their most bearish GBPUSD since late 2010, while CFTC COT data shows Non-Commercial positioning is near neutral.

We can’t rule out short-term relief rallies, but it seems that sentiment may have turned in favor of continued GBPUSD weakness on a break below key support at 1.60. 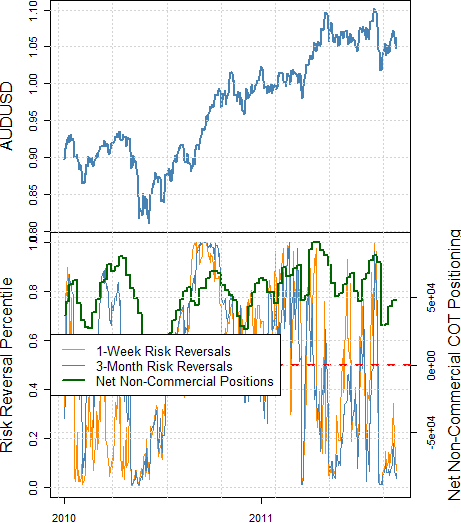 Last week we wrote, “FX Options sentiment recently hit its most bearish AUDUSD since the pair set a substantial bottom in early 2010, and a continued bounce off of said extremes favor short-term AUD strength. CFTC Commitment of Traders data has likewise shown Non-commercial traders have increased their bets on AUDUSD rallies.”

Indeed, risks seem weighed to the topside for the Australian Dollar. The key difficulty with the AUDUSD is that it remains extremely correlated to moves in the Dow Jones Industrial Average and susceptible to stock market tumbles. Yet watch for the Aussie Dollar to rally on any similar bounces in the Dow and broader risky asset classes. 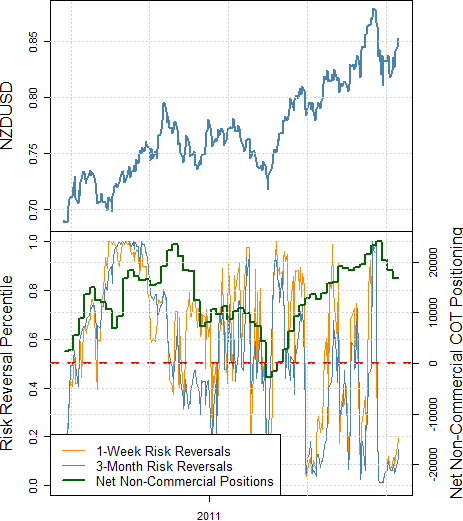 The New Zealand dollar remains in an unsurprisingly similar position as that of the Australian Dollar. Overall risks seem weighed to the topside as the pair recovers from recent bearish extremes in FX Options markets. All the while, CFTC Commitment of Traders data shows speculators remain heavily net-long the New Zealand Dollar against its US namesake.

Overall the short-term looks relatively bullish for the NZD. The same caveat is nonetheless the Dow Jones Industrial Average and other key assets: the correlation between the NZDUSD and the Dow leaves it especially susceptible to any sudden declines in stock markets. 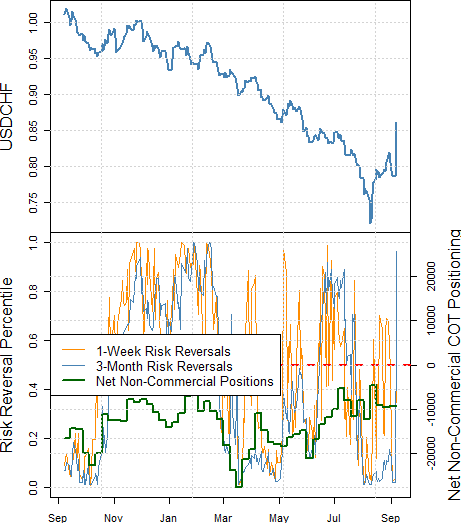 The USDCHF 3-month risk reversal recently hit its most bearish since the pair first broke below SFr1.10 in 2009 and has since reversed. And though sentiment extremes are only clear in hindsight, there is increased risk that the USDCHF may have set an important bottom in the process. Having a central bank in your corner doesn’t hurt, either. 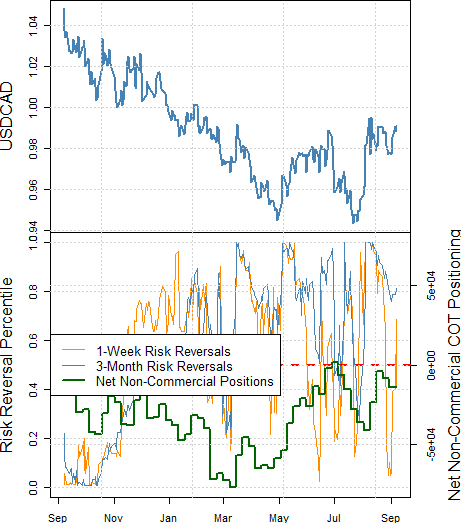 USDCAD FX Options sentiment has improved modestly as the pair bounces off of range lows. CFTC Commitment of Traders data shows that Non-commercial positioning is effectively neutral, and we see no clear signs that the pair is likely to break beyond its recent trading range.

It is difficult to establish a strong trading bias amidst such pronounced choppiness. The recent trend towards USDCAD strength gives us a modestly bullish bias. Yet the pair could just as easily reverse at recent range highs.