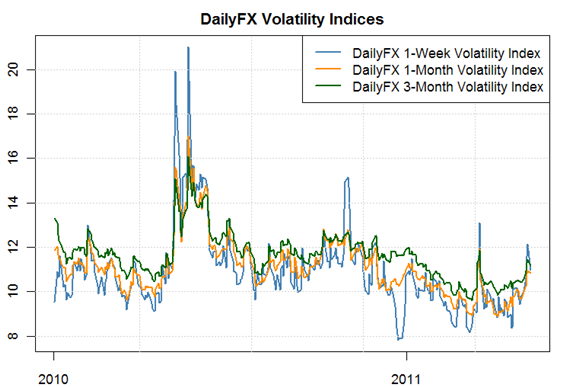 US Dollar May Have Set Important Bottom

An aggressive shift towards the US Dollar across FX Options markets warns that the Greenback may have set an important bottom against the Euro, Canadian Dollar, and New Zealand Dollar.

FX Options traders have suddenly shifted towards betting on and hedging against US Dollar strength across almost all major counterparts, warning of a potentially pivotal move across major currency pairs. It is clearly difficult to pinpoint exactly when a trend will reverse. Yet CFTC Commitment of Traders data has continued to warn that Non-Commercial traders have continued to pile into US Dollar-short positions. Sentiment extremes are only clear in hindsight, but a continued USD short covering could produce the reversal we’ve long been looking for across the board. 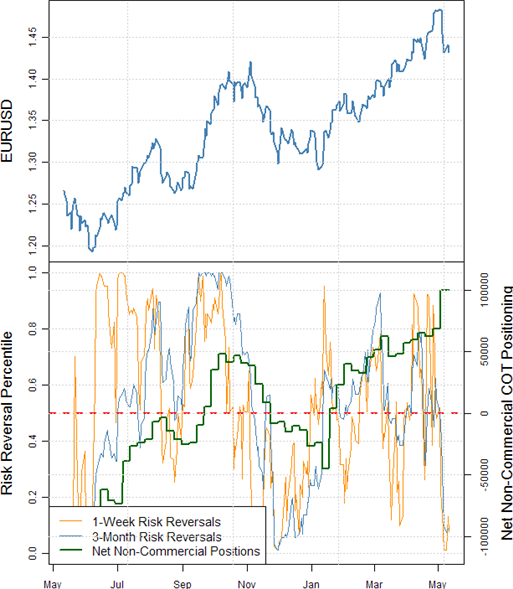 An aggressive shift in Euro/US Dollar price action has led to a similarly sharp shift in FX Options risk reversals, increasing the likelihood of an important top. Our benchmark breakout-style risk reversals system is quite close to establishing a hypothetical short position in the EURUSD as the 3-month risk reversal trades near the bottom of its 90-day range. The sharp shift is in marked contrast with Forex Futures positions; COT data showed that Non-Commercial traders were far and away the most net-long EURUSD since 2007.

Such one-sided leveraged bets warn that price could easily fall sharply as traders cover USD-short positions (EURUSD-longs). Indeed, we’ve seen a dramatic turnaround from the highs, and a continued shift would signal further losses are likely. 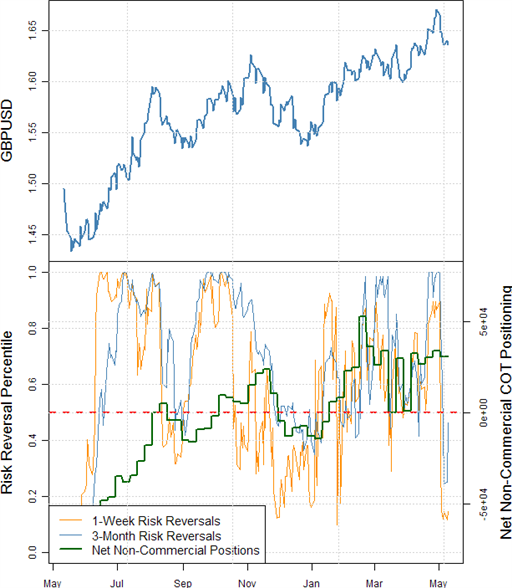 A noteworthy pullback in the British Pound has been met with a similarly pronounced correction in FX Options risk reversals, suggesting some have shifted towards betting on and hedging against GBPUSD weakness. This stands in contrast with futures positioning near its most net-long since February. Though our benchmark breakout-style system is not especially close to establishing a short position, we have seen an important move in risk reversals that warns many are betting on/hedging against further weakness. 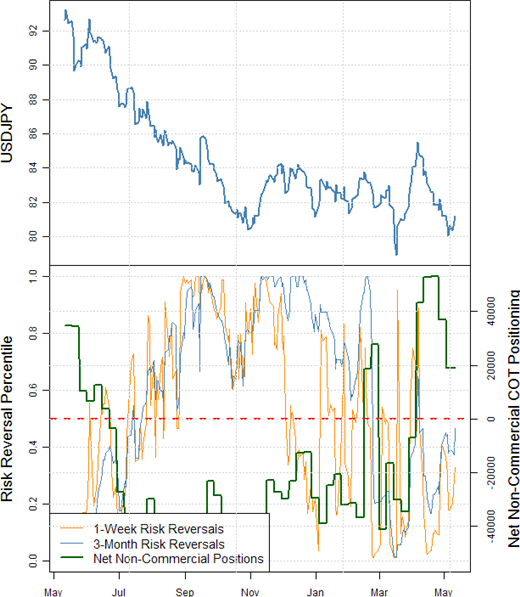 Large week-to-week swings in Japanese Yen sentiment/positioning make it difficult to establish a lasting bias on the fast-moving currency pairs. Non-commercial futures positioning recently hit its most net-short JPY (long USDJPY) since mid-2010 but has since corrected and is now near neutral. Risk reversals, on the other hand, have been trending towards JPY long positions (USDJPY shorts). The conflicting signals give us relatively little conviction in either direction on the USDJPY. 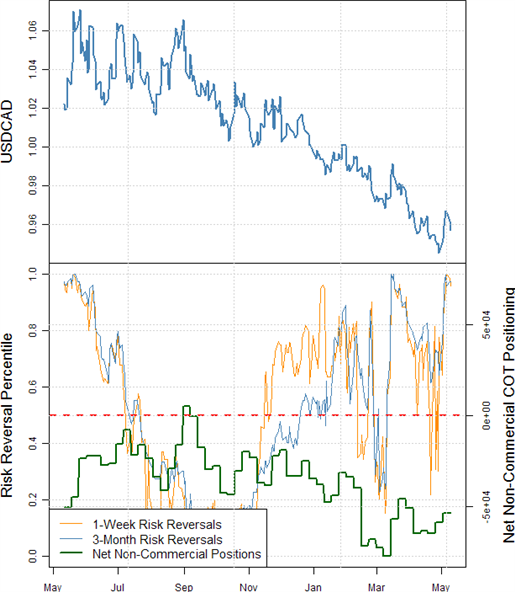 Our benchmark breakout-style risk reversals trading system hypothetically went long the USDCAD from May 4 at approximately the C$0.9595 mark, and an important shift in sentiment points to further gains. We have long argued that extremely one-sided Non-commercial futures positioning warned that a USDCAD short-covering could force substantive strength. A continued shift towards bets on and hedges against USDCAD would point to further rallies.

It is admittedly risky to bet against such a one-way trend, but the likelihood of a fresh USDCAD low has diminished with seemingly little participation in USDCAD selling. 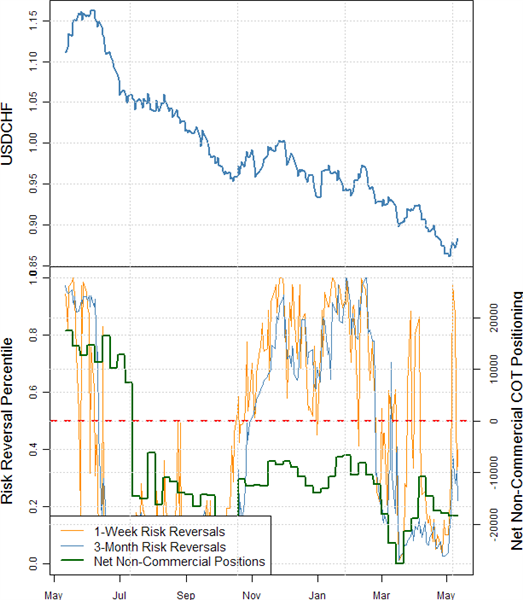 Aggressive week-to-week shifts in FX Options risk reversals make it difficult to establish a lasting bias in the USDCHF pair. Our benchmark FX Options risk reversals system hypothetically went short USDCHF on March 17 near the SFr 0.9165 mark and closed it as of May 6 near 0.8790. Risk reversals corrected significantly higher on the recent USDCHF bounce, while recent COT data shows Non-Commercial traders remain heavily net-long CHF (short USDCHF) through the past week. We need to wait for a more lasting shift in sentiment to call for a USDCHF reversal with any sort of conviction. 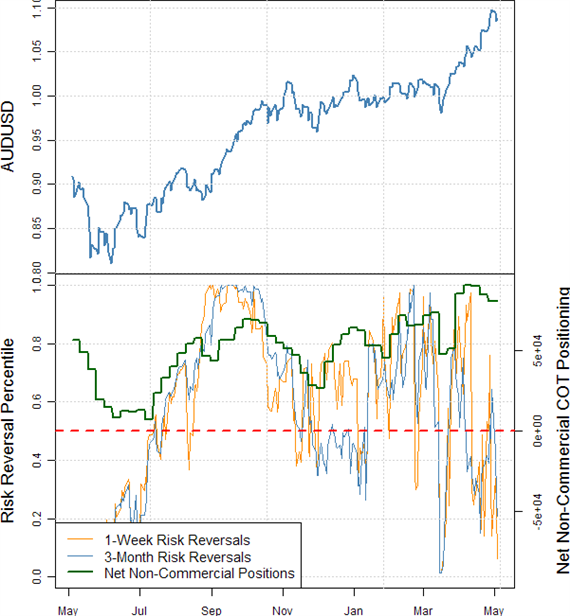 The Australian Dollar continues to defy calls for a sustained pullback, rallying sharply after initial signs that it could continue lower through recent trade. Net non-commercial futures positioning is now just below its most bullish on record, emphasizing that we are seeing unprecedented times for the Australian Dollar.

FX Options Risk Reversals have not matched futures positions, however, warning that participation in rallies is waning. Such a divergence warns against aggressively chasing AUDUSD gains. Indeed, risk reversals are near their most bearish in the past 90 days and give early signs that the AUDUSD could reverse. 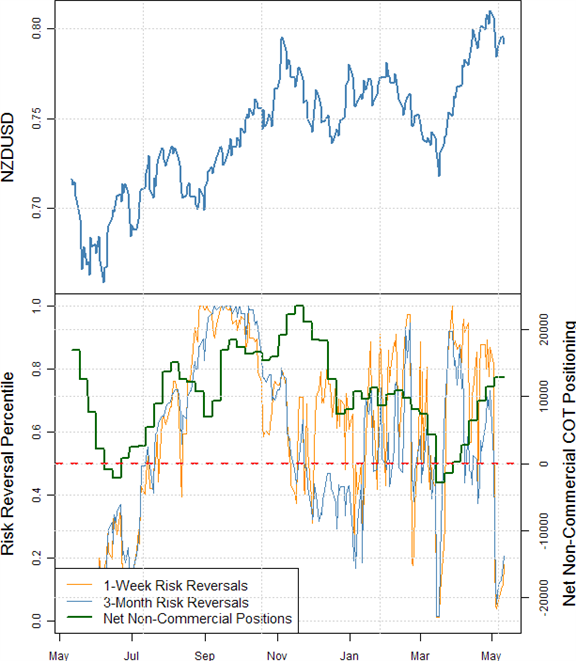 An important reversal in FX Options sentiment warns that the New Zealand Dollar could continue lower against its US namesake. Our benchmark FX Options risk reversals system just narrowly missed going short the NZDUSD through its recent correction. Recent COT data shows Non-commercial traders remained heavily net-long the NZDUSD through the past week of trading, and a material deleveraging across markets could force sharp declines. It seems like the NZDUSD has made a potentially significant turn and the likelihood of a fresh high has become quite low.