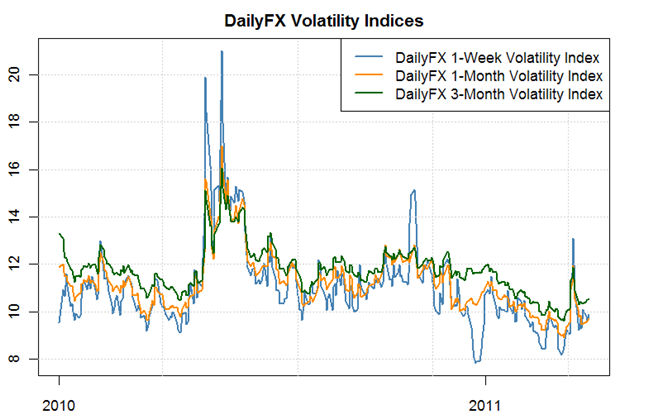 FX Options data continues to show an important divergence between Euro/US Dollar price action and sentiment, warning that the pair may have set a top in similar circumstances to November, 2010.

CFTC Commitment of Traders data shows that Non-commercial futures traders remain near their most net-long Euros since the pair made a run towards 1.60 in 2007. All the while, FX Options risk reversals show that many have in fact begun to bet on and hedge against EURUSD weakness. The material divergence between these two typically-correlated measures of sentiment warns that there is increasingly little participation in EUR rallies. Such signs are reminiscent of the Euro’s topping in late 2010, and indeed risks remain weighed to the downside for the high-flying EURUSD. 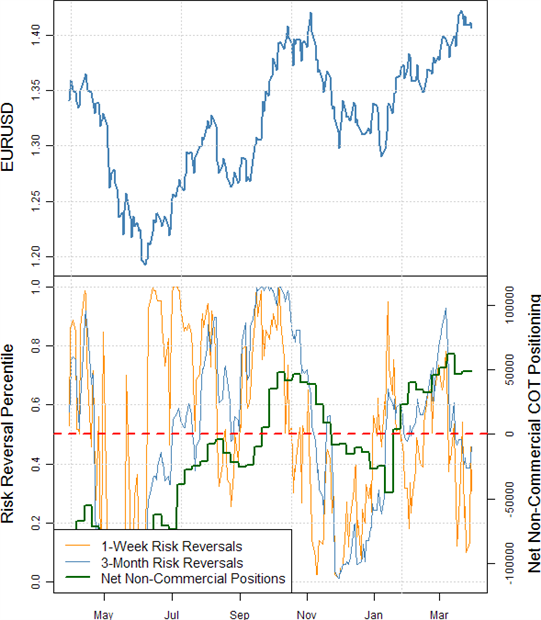 CFTC Commitment of Traders data shows that traders remain near their most net-long Euros since the pair traded on its way to the 1.60 mark in 2007, but FX Options risk reversals have not followed. The strong divergence between FX Options sentiment data is reminiscent of the similar moves we saw in late September/early November of last year.

Non-commercial futures positioning hit fresh bullish extremes, but a noteworthy pullback in risk reversals warned of waning interest in Euro longs. It is exceedingly difficult to time reversals, but the Euro could soon set an important top and reverse sharply against the US Dollar. Initial signs suggest that the Euro may have already topped, but we would need a much more aggressive break of support near 1.4050 for confirmation. In the absence of a break, we can’t rule out a fresh high before a sharper turn. 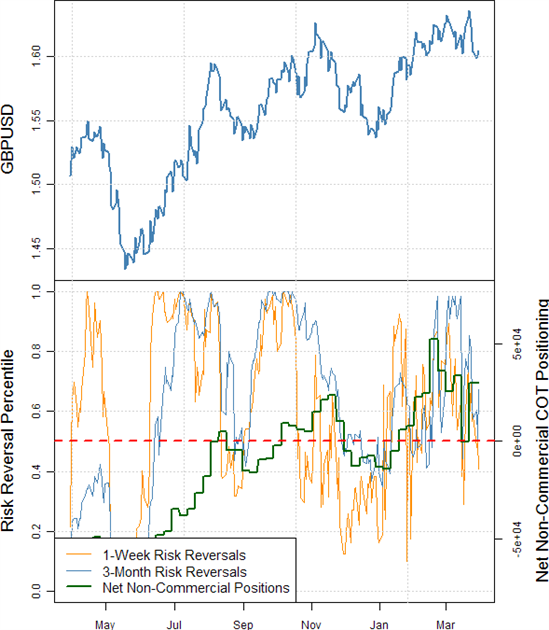 The British Pound has fallen sharply through recent trade, but a stall at significant support suggests bulls have not yet given up the fight. FX Futures and option sentiment remains fairly bullish the British Pound, but it is important to keep in mind that we have just pulled back from major bullish sentiment extremes. There remains distinct risk that a further unwind of GBP longs could force further losses, but support at 1.60 has thus far proven formidable and we may need to see a break to have confidence in bearish forecasts. 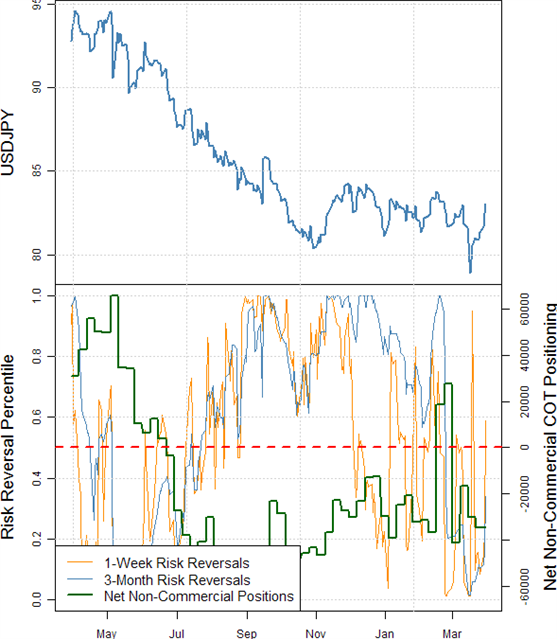 Continued Japanese Yen volatility has made it difficult to establish a lasting bias on the USDJPY pair, and indeed markets have most recently moved to bet on and hedge against USDJPY gains (Japanese Yen weakness). It is nonetheless difficult to know whether this will be a lasting shift in sentiment, and we are disinclined to take a strong bias amidst exceptional volatility. 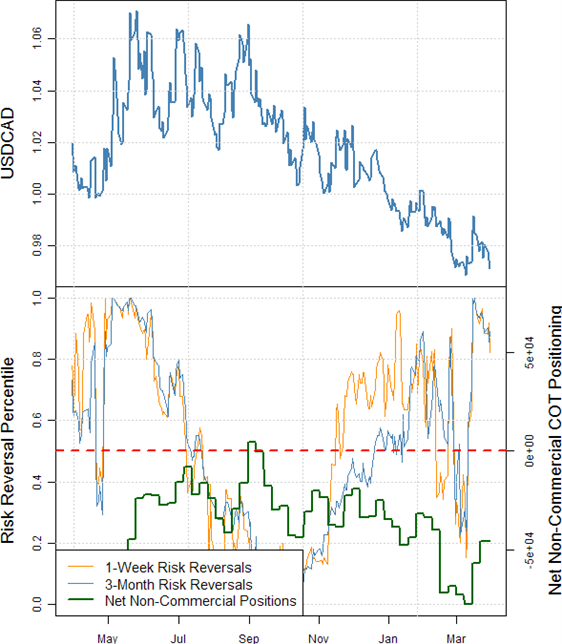 The Canadian Dollar has defied calls for a larger reversal, renewing rallies despite noteworthy corrections from sentiment extremes. As of just three weeks ago we warned that net Canadian Dollar Non-commercial positions were at their most bullish since the pair set an important bottom in late 2007. The fact that positioning has since corrected suggests that the pair may have hit a significant price extreme. Yet a fresh push lower warns against taking aggressive bullish positions.

Our benchmark breakout-style risk reversals trading signal hypothetically went long as of March 15 near the 0.9860 mark, but said position is at danger of being stopped out as price has since moved sharply lower. 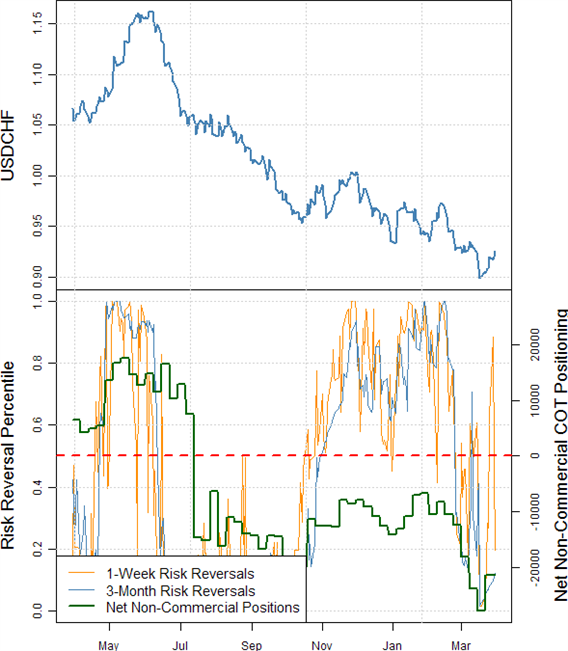 Traders have grown aggressively bullish the Swiss Franc as it continues to set fresh record-highs against the US Dollar. COT data shows Non-commercial traders near their most net-long the Swiss Franc (net-short the USDCHF) since December, 2009. FX Options risk reversals likewise show that many continue to aggressively bet on and hedge against further Swiss Franc strength (USDCHF weakness). It is very difficult to advocate for a USDCHF short position as the pair trades at record-lows, but we would need to see a material reversal in price to call for a reversal all the same. 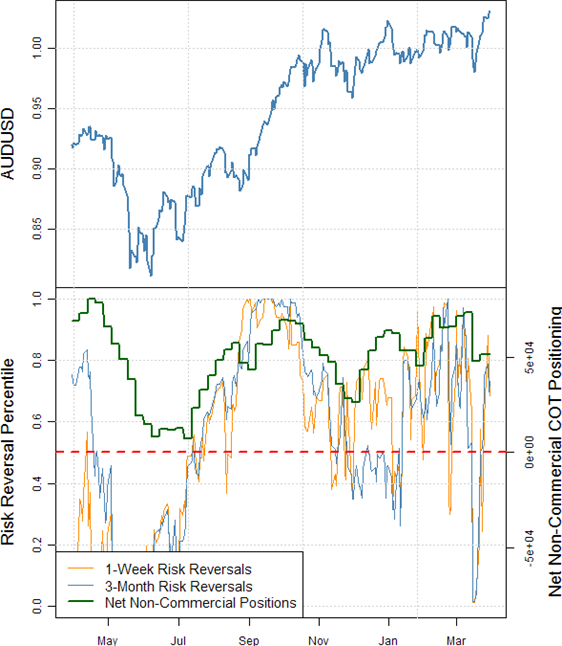 The Australian Dollar continues to defy calls for a sustained pullback, rallying sharply after initial signs that it could continue lower through recent trade. We have argued that the AUDUSD was at risk of significant reversal as COT data showed net Non-commercial positioning at its most net-long since the pair set an important top in early 2010. Indeed, FX Options risk reversals subsequently hit their most bearish in the preceding 90 days, and our benchmark breakout-style system hypothetically went short as of March 15 near 0.9910. Yet said trade was subsequently closed out at a loss, and we await further signs of important pullback before renewing our calls for AUDUSD weakness. 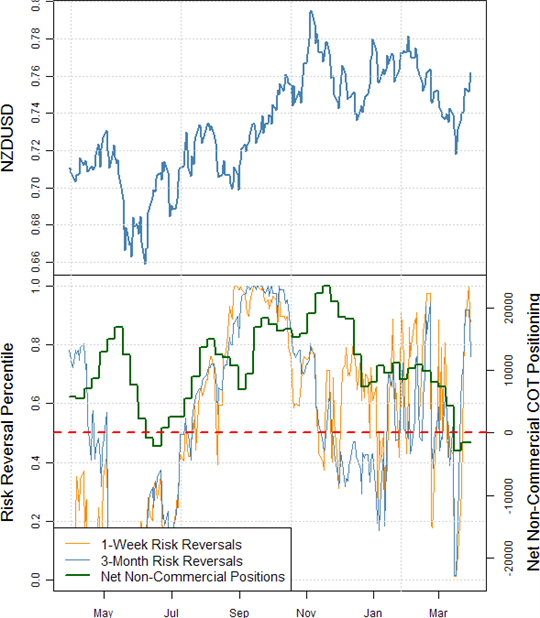 Recent New Zealand Dollar price action closely resembles that of the Australian Dollar, and the NZDUSD has likewise defied calls for continued declines through recent trade. Our benchmark breakout-style risk reversals system hypothetically went short the NZDUSD as of March 15 near the 0.7320 mark. Yet said position has been closed out at a modest loss as the pair has quickly regained ground.

Recent Commitment of Traders data shows that Non-commercial traders are now net-short the NZDUSD. Said fact suggests that the pair is subsequently less likely to see large corrections on a deleveraging across financial markets. Our short-term bias is admittedly unclear.