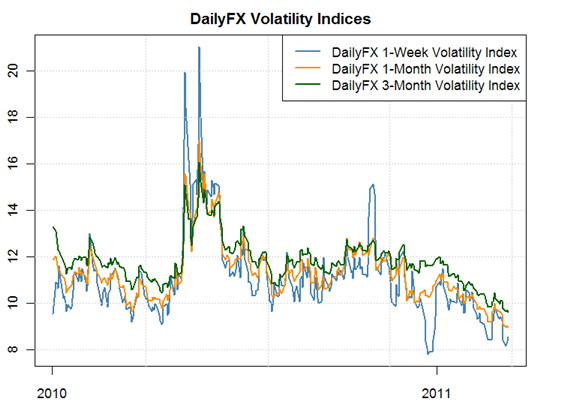 FX Options and Futures data warns that the US Dollar may be at or near an important bearish sentiment extreme, increasing the risks of an important short-term bounce in the beleaguered USD.

CFTC Commitment of Traders data shows that speculators remain heavily net-short the US Dollar against the Euro, British Pound, Canadian Dollar, Swiss Franc, and Australian Dollar. The confluence of heavily one-sided positioning increases the likelihood that we are at or near an important bearish sentiment extreme. Yet it is likewise important to note that volatility expectations are exceedingly low and do not support the case for major short-term moves in these currency pairs. We will need to wait for a pickup in volatility and a substantial US Dollar bounce to call for continued strength in the previously fast-falling currency. 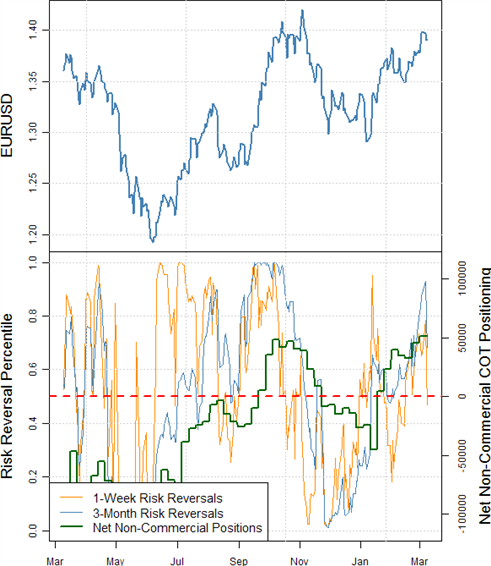 Commitment of Traders data shows that Non-Commercial futures positioning is now at its most net-long the Euro against the US Dollar since the pair set an important top in late 2009. Such one-sided positioning serves as clear warning that we may be at or near a bullish sentiment extreme, and the fact that the Euro has been unable to hold the 1.40 mark increases risk of an important correction. Risk reversals have likewise hit near their most bullish since December and subsequently pulled back.

Sentiment extremes are only clear in hindsight, but the fact that we positioning and sentiment remains near bullish peaks increases the risk of an important Euro correction. A break below important congestion support near 1.3850 would increase confidence in calls for reversal. 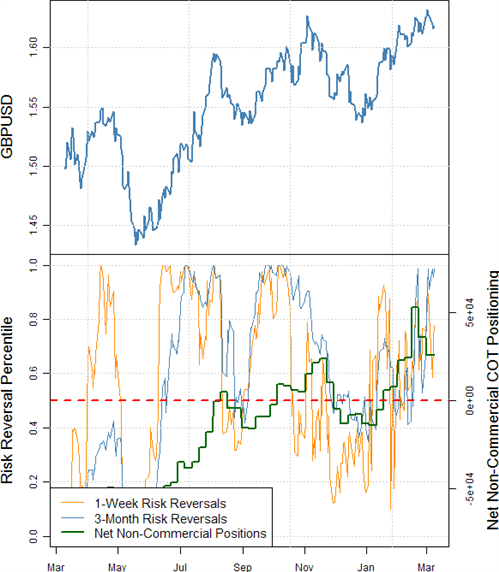 The British Pound/US Dollar pair shows important risk of correction as the pair may have set a bullish sentiment extreme through fairly recent trade. Commitment of Traders data showed that Non-commercial positioning hit its most net-long the GBPUSD since the pair traded above 2.00. Net-longs have since pulled back considerably, adding weight to claims that the GBP could continue to correct lower as traders shed one-sided positions.

Yet it is important to note that FX Options markets remain far more bullish the GBPUSD, and a spike in risk reversals has meant that our benchmark breakout-style trading system remains long from March 3 at approximately 1.6277. That trade looks at risk if this is indeed an important turning point. We will need to wait for a convincing price move in either direction before making any forecast with conviction on the recently-choppy GBPUSD pair. Yet in this author’s opinion, risks remain to the downside amidst an important pullback in futures positions. 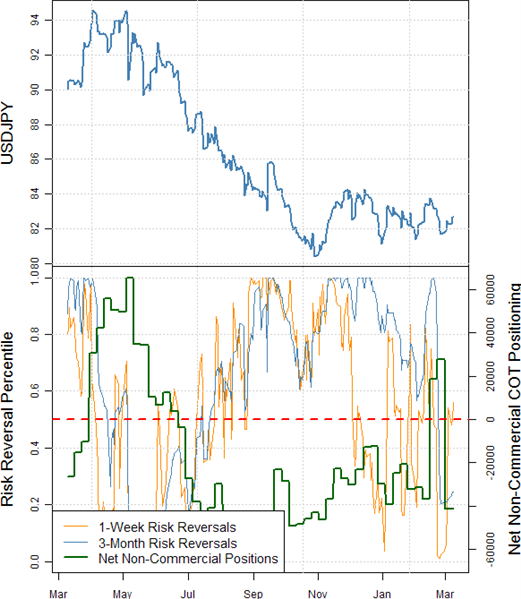 Aggressive and rapid shifts in USDJPY futures positioning makes it difficult to take a strong stance on the recently-rangebound currency pair. The US Dollar remains in an increasingly narrow triangle formation against the Japanese Yen dating back to November of 2010. Trying to time any sort of breakout in either direction has proven difficult, and we accordingly remain neutral the USDJPY until we see real conviction in short-term currency moves. 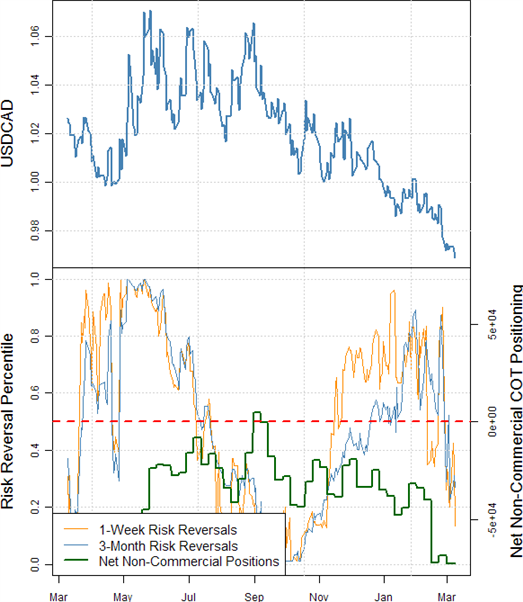 Sharp USDCAD declines have been met with similarly sharp shifts in FX Options and futures sentiment, underlining the extent to which traders are betting on further Canadian Dollar strength. Yet futures show speculators at their most net-short since the pair last set an important bottom and corrected sharply higher thereafter. It is obviously difficult to claim that the pair is at a bearish sentiment extreme when it continues to hit fresh lows on an almost-daily basis. Yet clearly one-sided sentiment warns that we could be near an important turning point for the Canadian Dollar against its US namesake. 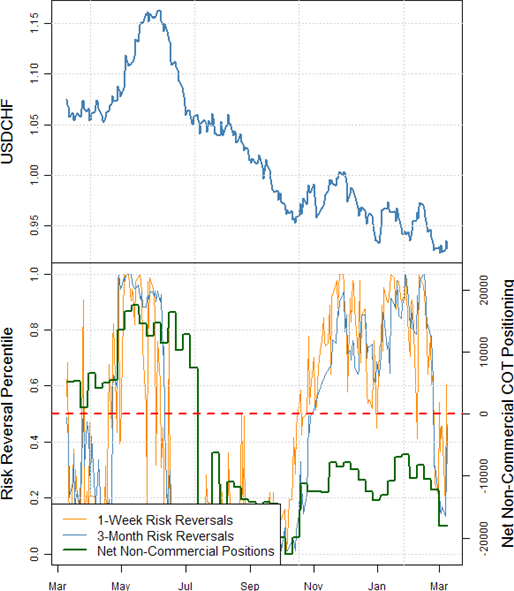 The USDCHF continues to hit fresh record-lows amidst aggressive safe haven demand, while COT data shows that speculative sentiment is not necessarily at important extremes. Trend-following Non-Commercial traders are indeed net-long the Swiss Franc against the US Dollar (net-short USDCHF), but they were far more aggressively short when the pair first broke parity through late 2010. The net result is that we cannot reasonably claim that we are near important sentiment extremes, and there is further room to run to the downside. 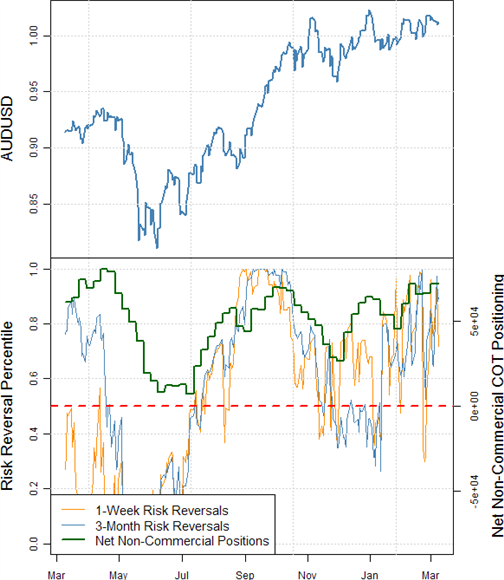 Futures and options show that traders remain heavily net-long and bullish the Australian Dollar against its US namesake. Non-commercial futures traders are now the most net-long the AUDUSD since the pair set an important top in the first half of 2010. Said fact does not singlehandedly guarantee that a pullback is likely. Instead we would need to see an important correction in price and sentiment before calling for a larger reversal.

FX Options for their part are now strongly bullish the Australian Dollar against its US namesake, with risk reversals now near their most optimistic since November, 2010. Our benchmark breakout-style risk reversals system is accordingly long from March 7 at approximately the 1.0120 mark. Yet it is difficult to claim that such a position will do well with positioning near an important historical peak. Short-term momentum remains to the topside, but we suspect that the first sign of trouble could lead to a substantial and lasting pullback in the Australian Dollar/US Dollar pair. 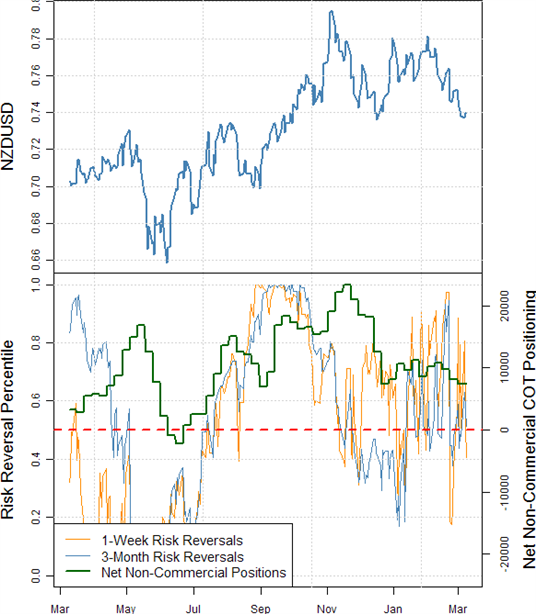 Noteworthy pullbacks in the New Zealand Dollar have led to similar corrections in Forex Futures positioning, and indeed it seems the tide has turned in favor of continued NZDUSD weakness. Yet it is difficult to claim on FX Options and Futures data alone that further short-term declines are likely. Both markets show sentiment/positioning in relatively neutral territory and do not give us strong conviction in our calls for continued NZDUSD weakness.

Short-term outlook will likely depend on whether the pair is able to hold important technical support levels just below the 0.7400 mark.