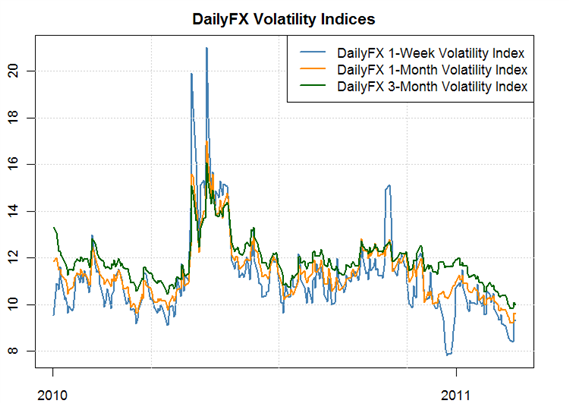 FX Options and Futures sentiment warn against taking aggressive bets on US Dollar strength, but a potentially significant British Pound bullish extreme warns that the GBPUSD could soon reverse on one-sided positioning.

CFTC Commitment of Traders data shows Non-commercial traders—most often speculative in nature—remain the most net-long the British Pound since the GBPUSD traded above 2.00. And though true sentiment extremes are only clear in hindsight, an important correction in FX Options risk reversals likewise suggest that the GBPUSD could turn lower through upcoming trade. 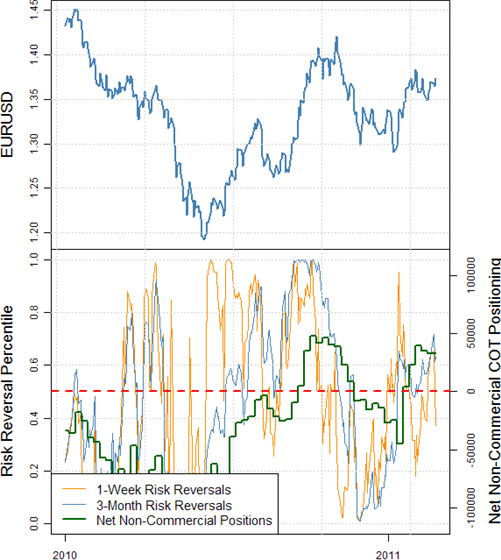 FX Options risk reversals show that many have bet on and hedged against further EURUSD strength, warning against taking aggressive short positions through near-term trading. Commitment of Traders data likewise shows Non-commercial positioning quite net-long, and momentum seems to favor further EUR strength. That said, it is difficult to advocate going long the EURUSD as it trades near the top of its year-to-date trading range, and we may need to wait for further clarification in sentiment before taking a stronger stance on the Euro/US Dollar pair. 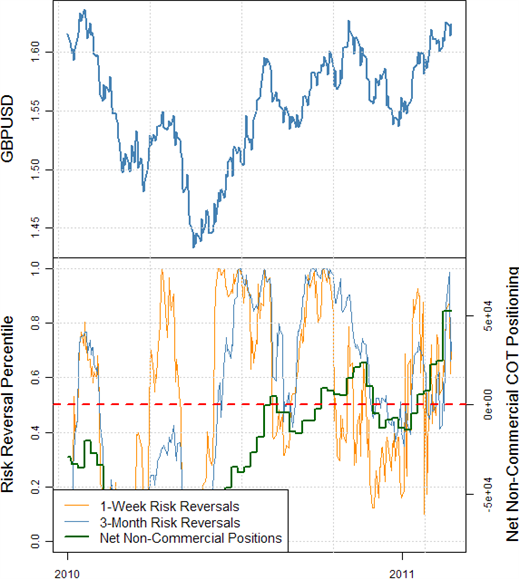 Continued British Pound strength has been met with aggressive bets on further rallies, and Non-commercial futures positioning is now at its most net-long since the pair traded above 2.00 in early 2008. Such clearly one-sided sentiment warns that the GBPUSD may have hit a bullish sentiment extreme and could soon reverse. Yet we must emphasize that timing such reversals is extremely difficult, and true sentiment extremes are only clear in hindsight.

Our breakout-style risk reversals trading system hypothetically went long the GBPUSD as of February 21 near the 1.62 mark, but a sharp pullback meant that it quickly closed said position the following day at a modest loss. We believe that the GBP may be near an important turning point, but we will need to see a sharper shift in sentiment to claim that the pair is likely to correct following a bullish extreme. 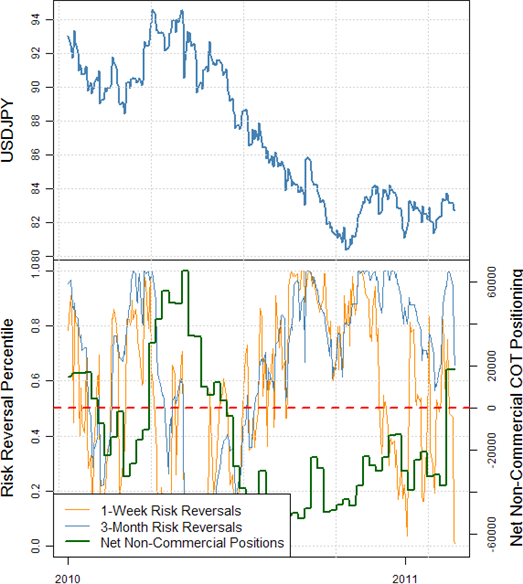 A noteworthy bounce in the USDJPY has pushed Non-commercial positioning on the Japanese Yen to net-short levels (net-long USDJPY) for the first time since mid-2010. Indeed, the bounce likewise led to an important shift in FX Options risk reversals and our breakout-style system hypothetically went long on February 16 near the 83.70 mark. Yet a subsequent correction meant that the system closed out said position at a modest loss as of today.

We have relatively little conviction in USDJPY forecasts amidst a mixed picture for trader sentiment. The pair remains in a longer-term downtrend, but it seems unwilling to break its multi-month range on market indecision. 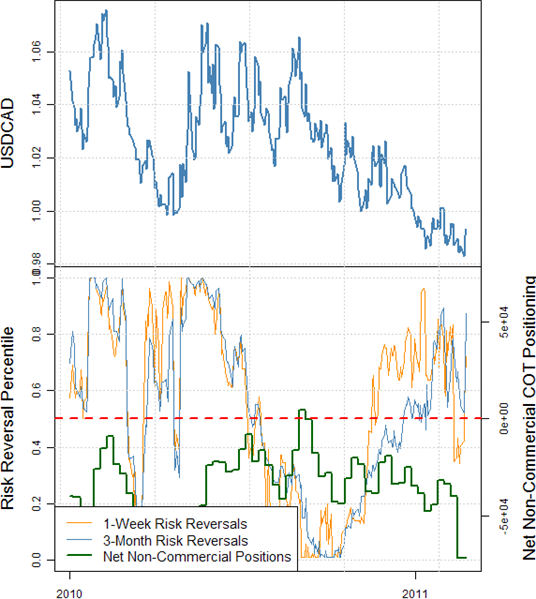 A potentially significant bounce in the US Dollar against the previously high-flying Canadian Dollar has been met with a similarly pronounced reversal in FX Options sentiment. It seems that many continue to bet on and hedge against USDCAD strength. Such a shift warns that the pair may have set an important low through fairly recent trade. FX Futures positioning shows that Non-commercial traders recently hit the most net-long the Canadian Dollar (net-short USDCAD) since the pair set an important bottom in early 2010. Such sentiment extremes underline the risks of an important correction. 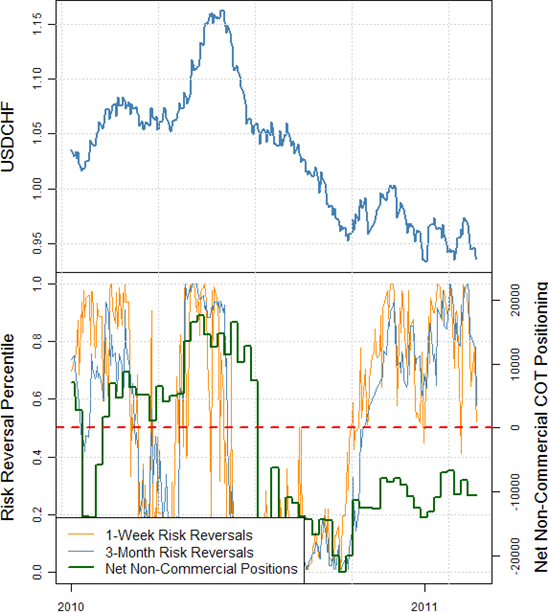 FX Options data shows that traders have recently shifted towards betting on and hedging against further USDCHF weakness, warning against aggressive bets on short-term rallies. Our breakout-style FX Options risk reversals system hypothetically went long the pair as of January 20, but an important correction in sentiment led the same system to close said position as of today. We previously claimed that it was unlikely that the USDCHF would set a fresh low following fairly clear sentiment extremes in late 2010. Yet we are not very far from important lows, and it is difficult to call for gains amidst such bearish short-term price momentum. 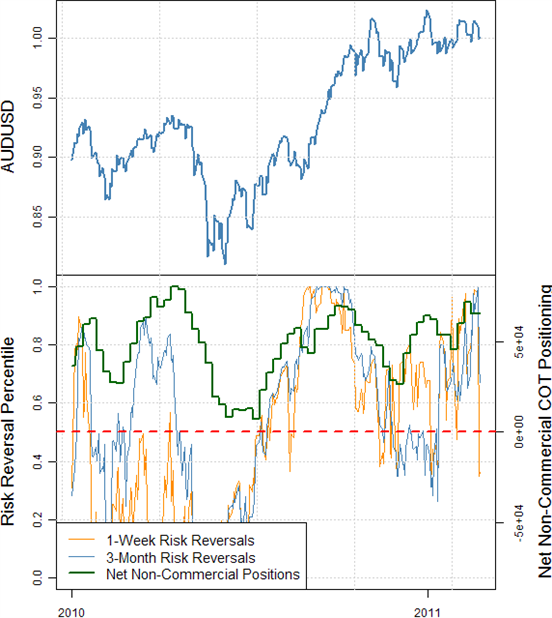 Intensely choppy AUDUSD price action has led to similarly choppy swings in FX Options risk reversals, making short-term forecasts difficult amidst unclear sentiment. Our benchmark breakout-style risk reversals system hypothetically went long the AUD as of February 21, but a subsequently sharp correction means that it closed said position at a modest loss as of today’s trading. FX Futures data shows Non-commercial positioning near significant bullish extremes, but it is difficult to claim that a reversal is likely amidst an unclear picture for shorter-term price action. 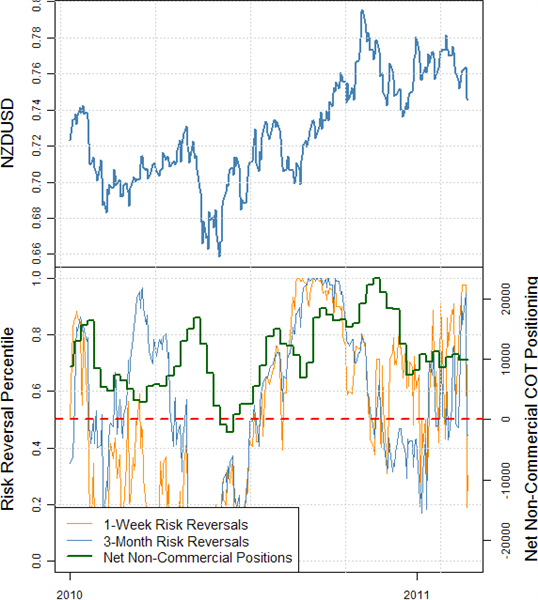 Sharp swings in New Zealand Dollar sentiment make short-term forecasts especially difficult and underline current market indecision on the future for the choppy NZDUSD. FX Options risk reversals recently saw an important bounce as the NZD corrected higher. Yet a subsequent turn lower forced a similarly sharp move in FX Options, and it seems that traders are now betting on and hedging against further NZD weakness.

Choppy moves in sentiment warn against taking an aggressive short-term stance in the NZDUSD. We remain overall bearish the New Zealand Dollar as it continues to correct from important sentiment extremes set through late 2010, but shorter-term forecasts are clouded by choppy price action and sentiment.