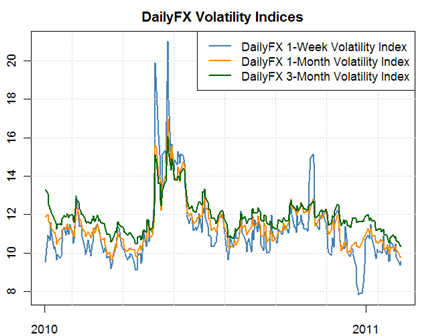 US Dollar Sentiment Points to Losses vs Euro, Recovery vs Canadian Dollar

FX Options data warns that the US Dollar may yet fall further against the Euro and British Pound, but important reversals in US Dollar/Canadian Dollar and US Dollar/Swiss Franc pairs points to potential for a narrow USD recovery.

Several weeks ago we claimed that the US Dollar may have set an important bottom against key counterparts on a strong divergence between price and sentiment. Yet such a USD reversal has proven elusive, and a more recent correction in sentiment and positioning warns against aggressive bets on USD strength. The potential exceptions include the USDCHF and USDCAD. Our benchmark FX Options Risk Reversals ‘Breakout’ system hypothetically went long the USDCHF from January 20, while a continued bounce in the USDCAD would likely produce a similar long position. 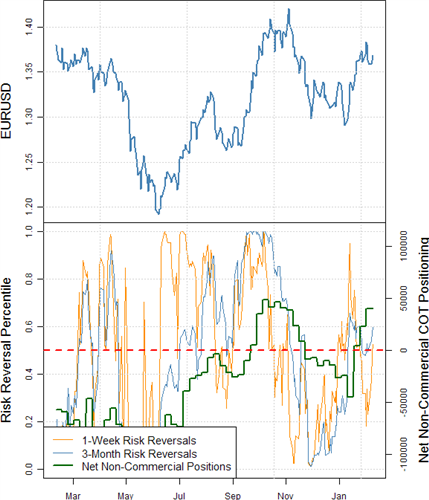 FX Options data shows that many traders have begun to bet on and hedge against further Euro strength against the US Dollar, warning against aggressive bets on EURUSD weakness. As of several weeks ago we wrote of an important divergence between risk reversals and EURUSD price. The currency pair continued to set fresh highs, but sentiment did not register fresh peaks and suggests few are concerned with further strength. Such a fact warns that gains may be unsustainable, but it is proved extraordinarily difficult to time any reversal and we hesitate to stick our necks out too far in the absence of a stronger price move.

We see little option but to remain short-term neutral until further clarification in investor sentiment. 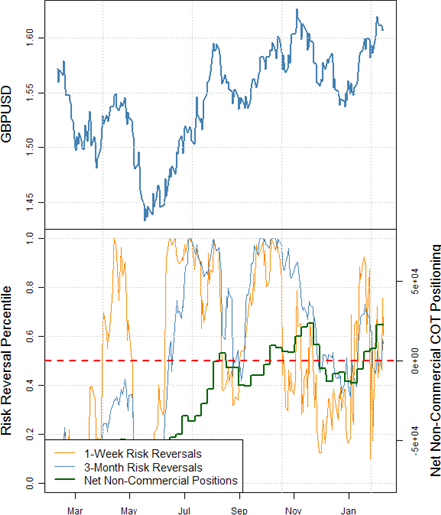 A bounce in the British Pound/US Dollar pair has been met with a reversal in FX Options risk reversals sentiment, supporting the case for short-term strength. Forex futures positioning shows that Non-Commercial traders are at their most net-long since the pair last traded above 1.60.

As with the EURUSD, we see some divergence between FX Options Risk Reversals and price; options sentiment is not hitting fresh bullish extremes despite highs in price. Yet it is less pronounced, and there is arguably scope for further GBP gains. That said, our benchmark FX Options trading systems are not particularly close to establishing a long position. 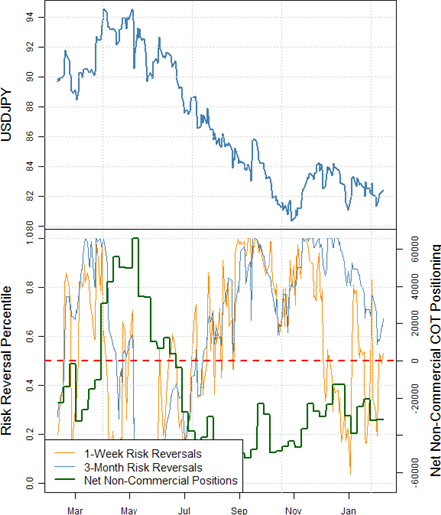 The recent bounce in the US Dollar/Japanese Yen currency pair has been met with a similar recovery in FX Options risk reversals. Yet the overall USDJPY downtrend leaves little confidence in calls for substantive rallies, and indeed we’ve been caught on the wrong side of USDJPY forecasts for quite some time now.

Absent a sharper recovery in sentiment, we will remain short-term neutral the USDJPY. 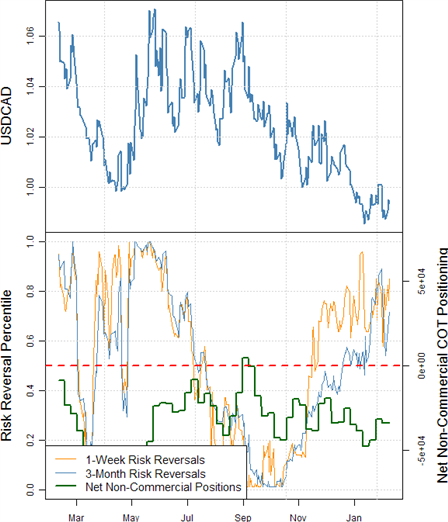 A potentially significant bounce in the US Dollar against the previously high-flying Canadian Dollar has been met with a similarly pronounced reversal in FX Options sentiment. It seems that many continue to bet on and hedge against USDCAD strength. Such a shift warns that the pair may have set an important low through fairly recent trade. FX Futures positioning likewise shows that Non-Commercial traders have pulled back from previous bearish extremes. Though it is extremely difficult to time an exact sentiment extreme, the fact that positioning has since corrected notably supports the case for further strength. 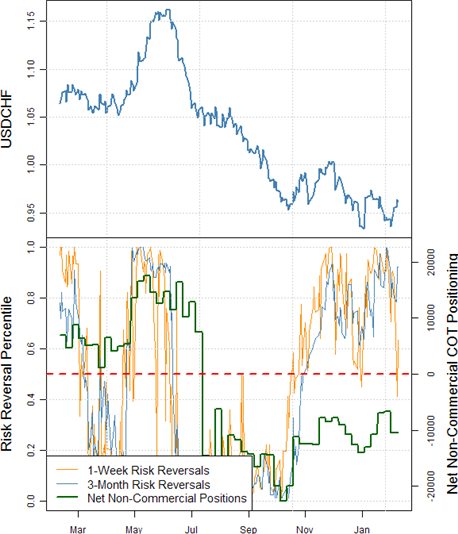 FX Options and Futures positioning continues to show a major divergence between sentiment and USDCHF price action, warning of a potentially significant USDCHF bottom. Non-Commercial traders are near their least USDCHF-bearish since the pair traded near SFr 1.06 in July, while our benchmark breakout-style FX Options risk reversals system hypothetically established a USDCHF long position as of January 20.

We believe that there is relatively little risk that the USDCHF sets a fresh low through upcoming trade. The considerable correction in sentiment suggests that the pair set an important bottom through December. 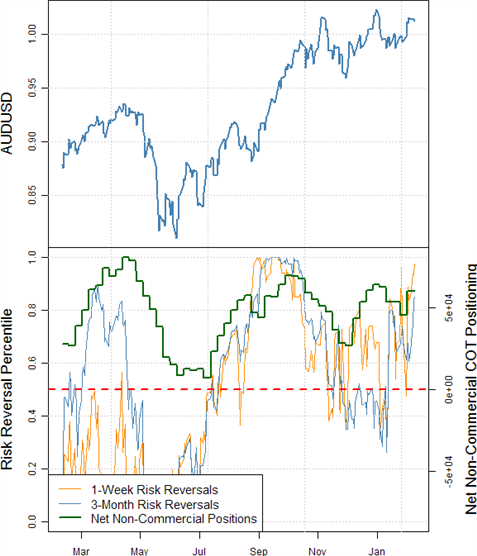 The Australian Dollar has bounced from recent short-term lows, and a commensurate shift in FX Options risk reversals suggests many have begun to bet on and hedge against further AUDUSD strength. The choppiness in price action and sentiment has made it exceedingly difficult to establish any sort of lasting bias on said currency pair. FX Futures data shows Non-Commercial traders hit major net-long extremes before pulling back as the pair similarly failed to hold its highs.

Such reversals typically come at a major price extreme and suggest that the Australian Dollar could have set a significant price high through previous trading. Yet timing a short position has proved very difficult, and the recent bounce in Risk Reversals warns against overleveraging oneself to the downside. 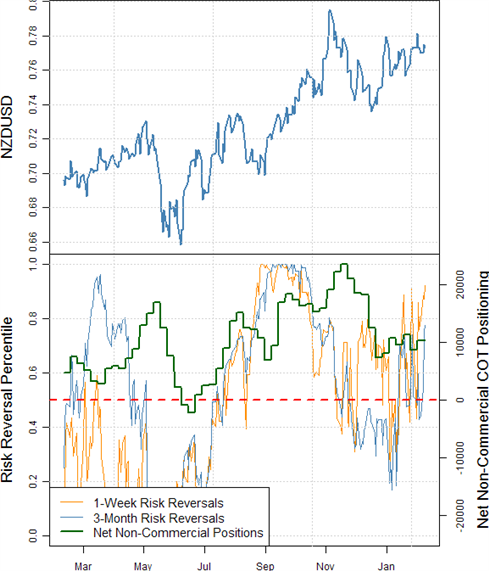 The New Zealand dollar has seen a similarly substantive shift in FX Options risk reversals, warning against taking aggressive shorts on the suddenly resurgent currency pair. The shift in sentiment suggests many have begun betting on and hedging against further NZDUSD rallies. And though we have remained steadfastly bearish the NZD for quite some time now, the short-term picture is clouded significantly by the sudden jump in risk reversals. We maintain that the NZD set an important high through the end of 2010, but taking short-term bets has become more complicated amidst a potentially important swing in sentiment.