How quicky the Mexican Peso’s fortunes have changed in recent weeks. When we last checked in at the start of March, the Peso was in the midst of a steady streak of erosion, having been battered by rising global bond yields, particularly those of its northern neighbor, the US.

But we viewed the developments as short-term in nature, noting that “more US fiscal stimulus is good news for risk appetite broadly, and a better than expected US labor market report for February has shifted the narrative from ‘inflation’ to ‘reflation,’ which tends to be beneficial for growth-linked assets. USD/MXN rates may be ripe for a reversal, while MXN/JPY rates could find their footing and shake off what’s been trendless trading thus far in 2021.”

Since we last checked in on the Peso, stability in long-end global bond yields has given room for risk appetite to return to markets, including in the emerging markets currency space – and the Mexican Peso has been among the best performers. Now, with the seasonally weak US Dollar helping pave the path, the Peso may be set up for a strong April and start to 2Q’21 (in line with our 1Q’21 Top Trade Opportunities and 2Q’21 Top Trade Opportunities).

The biggest event of the week has yet to come to pass for the Mexican economy, leaving open the possibility of more volatility in the second half of the week for MXN-crosses. Due out on Thursday, the January Mexican inflation rate (CPI) is expected to show an uptick from +3.76% to +4.15% (y/y), according to a Bloomberg News survey.

Moving into the base effect period around the start of the pandemic, higher inflation may serve to tamp down dovish machinations at Banxico in recent months (which runs against their longer-term reputation of being relatively hawkish compared to other regional central banks), giving the Mexican Peso further room to rally alongside other risk assets. 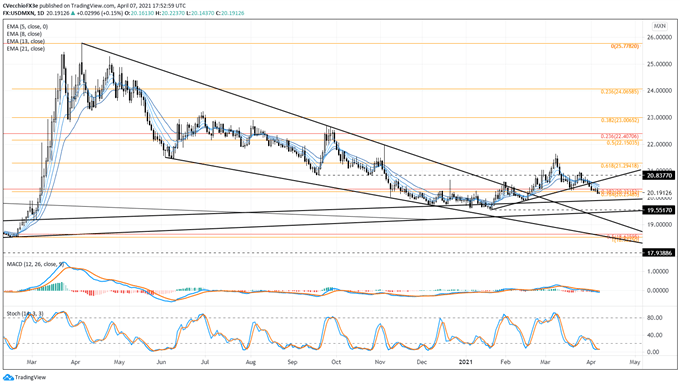 In the prior Mexican peso forecast, it was noted that “by returning above the 61.8% retracement, USD/MXN rates would shift from a neutral perspective to a bullish perspective. However, USD/MXN rates are attempting a classic turnaround Tuesday, with a bearish piercing candle forming on the daily chart.” This marked the high for the year for USD/MXN, which has been on a steady decline since then.

In turn, the uptrend from the January, February, and March swing lows has been lost, and this week’s price action has established a lower monthly low relative to March. Concurrently, USD/MXN has dropped below two key Fibonacci levels: the 38.2% retracement of the April 2011 low/April 2020 high range at 20.3215; and the 76.4% retracement of the 2020 low/high range at 20.2349.

The momentum profile has turned bearish. USD/MXN rates are below their daily 5-, 8-, 13-, and 21-EMA, which is still in bearish sequential order. Daily MACD is trending lower while below its signal line, while daily Slow Stochastics are nestled in oversold territory. If price action since early-March has resolved itself in the form of a potential head and shoulders pattern, it would hold that more downside towards the yearly lows may be in the cards. 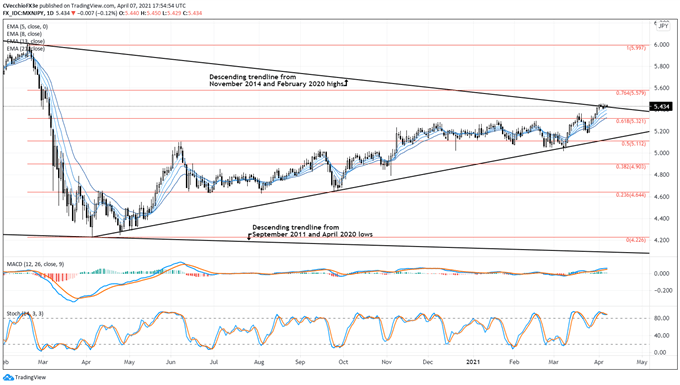 The last time we checked in, it was noted that “while the pair is not in any different position than it was at the start of this month or last, trading is a function of price and time, and the passage of time has seen MXN/JPY arrive at the rising trendline from the April and September 2020 lows – its pandemic uptrend. The initial rebound at trendline support arrives concurrently with the 50% Fibonacci retracement of the 2020 high/low range at 5.112. A break above the daily 21-EMA would signal greater potential for a return to the March high around 5.200.”

MXN/JPY rallied soon thereafter, clearing the daily 21-EMA en route to yearly highs. Now, the pair finds itself testing the descending trendline from the November 2014 and February 2020 highs, a multi-year trendline that also constitute resistance in a symmetrical triangle that’s formed since the start of the coronavirus pandemic.

Price action remains bullish. MXN/JPY rates are above their daily 5-, 8-, 13-, and 21-EMA envelope, which is in bullish sequential order. Daily MACD continues to climb above its signal line, while daily Slow Stochastics are holding in overbought territory. Given this context, the recent sideways drift in MXN/JPY rates over the past few days may simply be a pause before fresh highs are reached anew. The 76.4% Fibonacci retracement of the 2020 high/low range at 5.579 may be initial resistance if the bullish breakout ensues. 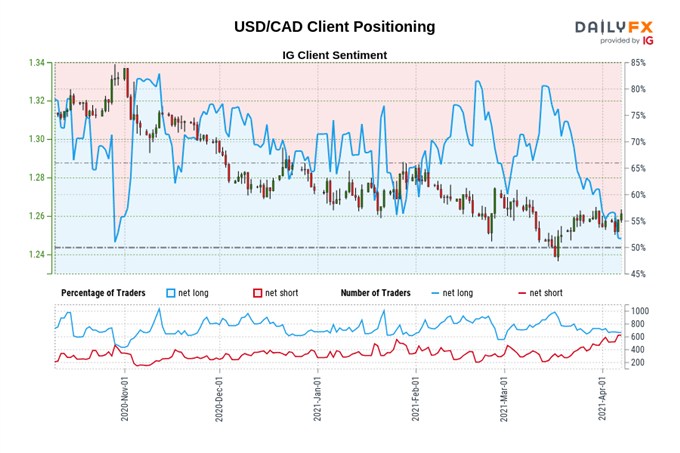