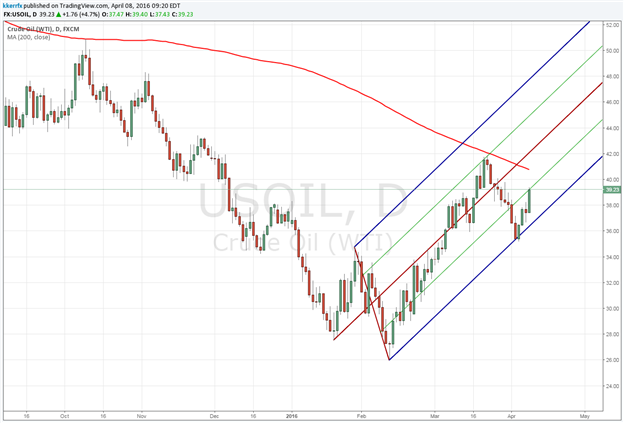 I have been touching upon a similar theme in most of my writings over the past couple of weeks. We are at a point in the markets where some pretty strong medium-term term trends have developed against opposing longer-term trends (copper, USD, stocks to name a few). Are we going to see the longer-term trends reassert themselves or are these medium-term counter-term trends going to continue further to test some much deeper retracement levels in 2Q16?

As markets often do, they are making figuring this out as complicated as possible. Crude is an instrument that clearly fits this bill as the commodity advanced more than 60% off the early February low before stalling out about 20 cents shy of the 200-day moving average late last month. The 200-day moving average has been a remarkable level of resistance over the past year or so as every counter-trend recovery attempt has failed right around that widely followed resistance. Was the failure last month the long-term downtrend reasserting itself or was the recent turndown from there just a minor pause before another squeeze higher? I can’t say. The fact is that crude found support exactly where it needed to earlier this week as it tested the lower parallel a pitchfork structure drawn from the late January low and has headed directly higher since. As such, this medium-term uptrend needs to be watched very closely next week. There is a pretty clear timing relationship towards the latter part of the week. A secondary low (against this week’s low) into this timeframe above the pitchfork parallel (currently around 36.50) would be pretty positive and open the door to another important push higher. A close over the 200-day moving average over the next few days would also be a pretty clear positive technical development and signal an important change in behavior. A failure on the other hand to hold above the support next week would argue that we have witnessed a secondary high against the 200-day moving average similar to how things played out in November. In this case look out below.