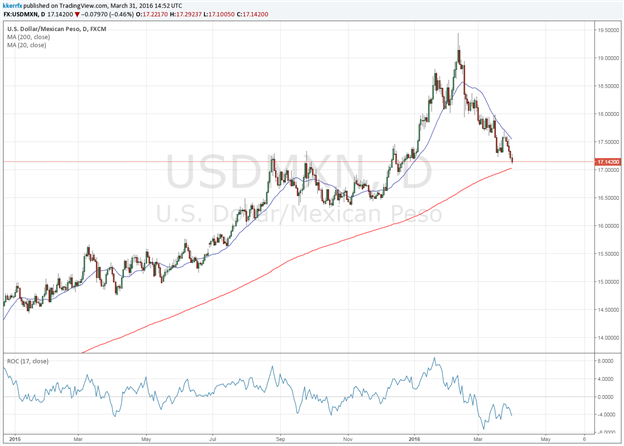 The turnaround in USD/MXN since the first half of February has been pretty remarkable. Since the exchange rate traded at all-time highs on February 11, it has fallen almost 12%. To put this into some context, it was up 11% during the month of January alone!

The 200-day moving average is nearby at 17.0200. USD/MXN hasn’t traded below the 200-day moving average in over a year and a half. I am not a huge fan of moving averages, but the 200-day moving average is one you have to keep an eye on for the simple reason that everybody else is watching it. As I have noted before, the widely watched indicator has a higher propensity to elicit a response when price has been above it for more than a year. So we’ll see how USD/MXN reacts when it gets around there. With the exchange rate in the tail end of a Gann “death cycle” (45-50 days down in one direction) it would seem the pair is susceptible to a turnaround of some sort over the next few days. If it is a weak bounce or we don’t get a bounce at all then that will be a pretty powerful technical signal that this move lower in USD/MXN still has a ways to go. Keeping with the moving average theme of today’s piece, the 50-day moving average has conspicuously turned into resistance over the past month. I would probably have to see that level retaken (currently at 17.5500) to take any sort of broader upside resumption scenario more seriously.