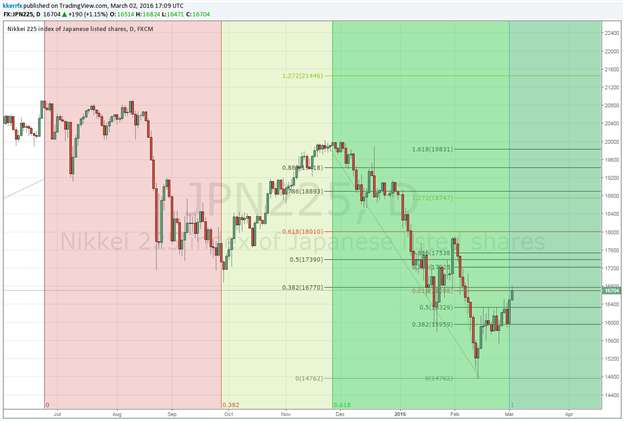 The Nikkei 225 traded at its highest level in three weeks this morning. As I wrote last week, this is what I wanted to see as a confluence of timing relationships over the next few days argues the broader downtrend in the index could try to reassert itself shortly. This timing confluence is made up of the 100% retracement in time of the October 2014 – June 2015 advance, the measured move in time of last year’s June – September decline (as measured from the closing high in November) and the 61.8% retracement of the time between last year’s June and November highs. What makes this window particularly compelling, is that the index has respected some of this same symmetry already twice before as the low in September occurred at the 38% retracement in time of the October 2014 – June 2015 advance and the high in November occurred at the 61.8% retracement in time of that same move (not to mention those two points now have relationships aligning here as well).

I am generally looking to fade the prevailing short-term trend into these types of timing windows and that is the reason I wanted to see the rally in the Nikkei continue this week. What makes this situation a bit more compelling is that the medium-term trend is clearly down so a reversal here would actually allow one to align themselves with the broader trend. We shall see, this is all just a potential setup until price gives a clearer signal that a reversal is actually underway. The price zones I am monitoring closely are 16,700/80 and 17,050/200. The former, marks a nice convergence of the 61.8% retracement of the February range and the 38% retracement of the November – February decline, while the latter is fairly important looking confluence of resistance that includes the 50-day moving average, the median line of the January low, the 38% retracement of the June - February decline and the 78.6% retracement of the February range. A clear failure around ones of these zones should open up the downside. Continued strength past Friday, on the other hand, would clearly undermine my negative cyclical thinking and signal a much more important move higher is probably underway.