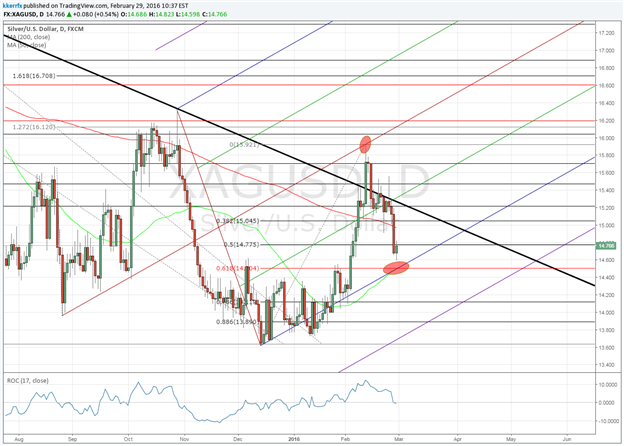 Silver – Next Few Days Important For The Metal

An interesting divergence has developed between Gold and Silver over the past couple of weeks. Gold remains in a holding pattern above the October high, while Silver has broken lower from its consolidation to trade under the 200-day moving average. I have generally been looking for the end of the quarter/start of 2Q to be some sort of big inflection point for the two metals from a timing standpoint so I have been trying to stay relatively “agnostic’ until then.

That all said, the price picture in Silver is getting rather interesting. The high earlier in the month came from the median line of a pitchfork drawn from the August/December lows and the October high. Following the break of the 200-day moving average on Friday, focus is now on the lower parallel of that same structure as it coincides with the 61.8% retracement of the December – February range and the 50-day moving average. The looks to be a fairly clear attraction area for the market in the days ahead with the reaction around there likely to have a lot of technical implications for the metal in March. A clear break of this zone around 14.50 opens the door to another leg down in the weeks ahead - possibly towards last year’s low. However, this could very well set up a very important low given the cyclical considerations at quarter-end. Counterintuitively, a successful hold of the 14.50 zone over the next few days that is followed by a strong rally would set up a potentially important top into the critical late March/early April cyclical period.