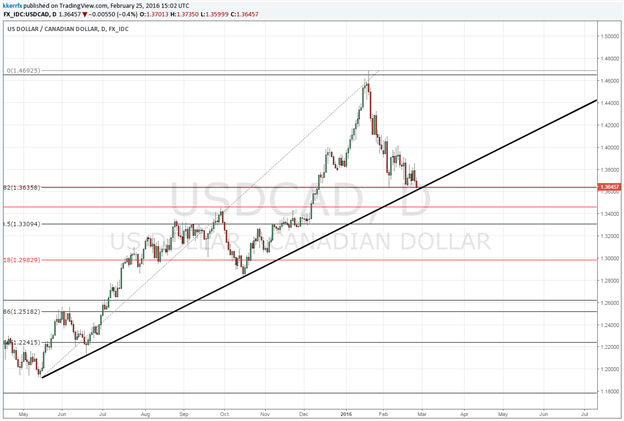 USD/CAD – Still at the Mercy of Oil?

USD/CAD – Still at the Mercy of Oil?

USD/CAD failed near the 78.6% retracement of the 2002 – 2007 decline in the 1.4640 area at the end of January. This reversal coincided with the most extreme negative sentiment ever in the Canadian dollar on a compilation index of various surveys that include the DSI, Ned Davis and others. As a contrarian, I take multi-year sentiment extremes pretty seriously especially when they coincide with big levels of symmetry like a long-term retracement so I have been open to this decline in the exchange rate extending. The wildcard has been crude which remains extremely volatile and tends to drag CAD down with it anytime we get a decent drop. If the commodity can get any sort of traction over 35.00 then CAD could be a real beneficiary.

The shorter-term cyclical picture suggests the first part of March should be the next important test for USD/CAD. I was looking for the rate to recover around the middle of February and the fact that it could not was a pretty clear negative for me. Turn windows are like highways exits. If the market does not take them then it is a pretty strong sign that the market just wants to continue in the direction it has been heading in - which has been the case here. From a price standpoint the 1.3600 area does look to be an important zone as it marks a convergence of the trendline connecting the May & October lows and 9 square root relationships from the year’s high. Some basing action around here would not surprise, but a clear break raises the possibility for a much more aggressive slide into the first part of next month. The next couple of says should prove pretty critical.