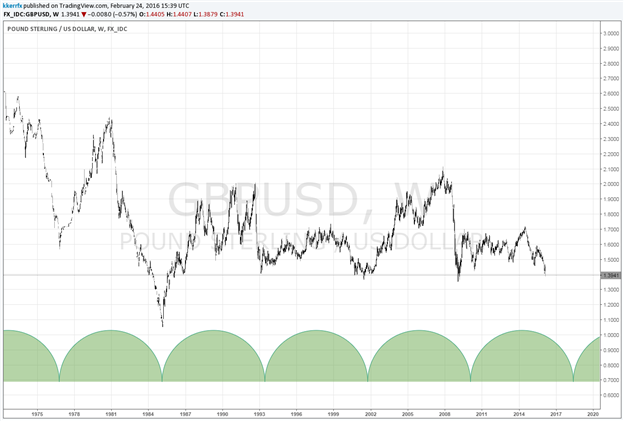 The chart above shows a fairly clear 8-year low to low cycle in GBP/USD. The 8 to 9 year cycle is one of my idealized intervals as it fits well with the Martin Armstrong Pi cycle and other geometric concepts. A few things really stand out to me when I look at the chart above. The first is that the upward portion of these low to low cycles tend to last around 5 to 7 years. I actually wrote about this long-term phenomenon about three years ago and suggested that Cable probably had another serious move higher in it before heading down into the 2017/2018 timeframe because of the historical tendency for advances to last more than half the full low-to-low cycle. This is pretty much, what we got as the high in July of 2014 occurred a little after 5 years from the important cyclical low in 2009 and fits nicely with the historical averages. More importantly, it also argues that GBP/USD is in the tail end of this cycle and should head generally lower into the latter part of next year/first part of 2018, which coincidentally aligns with other long-term relationships.

The other big takeaway I get from the chart is the clear resemblance of the current cycle with that of the one in the 1990’s. Both occurred after sharp declines in the pound because of crisis (ERM and GFC) and both had relatively minor recoveries of less than 30%. If GBP/USD continues to follow the 1990’s cyclical, analog it argues that the decline over the next year or two should not really extend more than a few big figures beyond the 2008 low around 1.3500. It also suggests that there will be a couple of decent counter trend advances as it works lower. We shall see. Mark Twain is credited with saying, “History doesn’t repeat itself, but it does rhyme”. I think the clear risk heading into the end of the cycle in 2018 (because of the confluence of other important timing relationships at the same time) is that the analog with 1990’s begins to break and we get more aggressive weakness like in other episodes.