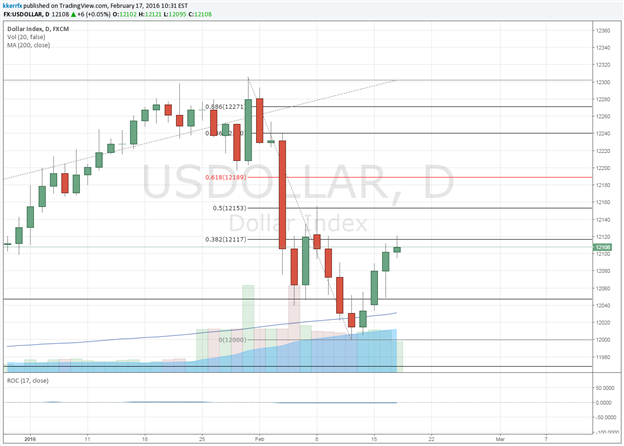 US Dollar Index – Big Test Coming Up For the Greenback

US Dollar Index – Big Test Coming Up For the Greenback

We are now almost two months into 2016 and shorter term cyclical counts finally seem to be working again. Most of my short-term techniques revolve around trading day counts in one form or another and the impact from the holidays at the end of the year usually wreaks havoc on them over the first few weeks of the year.

With the holiday impact finally having dissipated, the FXCM US Dollar Index (equally weighted basket of USD versus EUR, JPY, GBP & AUD) is one chart that particularly stands out at the moment from a shorter-term cyclical point of view. What I particularly like about the chart is that both the absolute high and closing high of the last up trend cycle were on the same day. This gives us a pretty clear starting point, which is half the battle. Gann often stated in his work that if you want to use timing techniques properly you need to find the right starting point. Easier said than done as markets often give us several highs to choose from at a turn. The fact the US Dollar Index has both highs on the same day is a nice luxury. From this high, the move lower has unfolded nicely with the minor turns coming right about where they should.

If this near-term cycle continues to play out the way I suspect then we should get a high sometime before the end of the week – ideally Thursday from somewhere below 12,150. Assuming we get this high it will then set up another leg down into the latter part of next week. This will arguably be a very important inflection point for the Greenback as a turn back up around this time would argue that the broader trend has survived the reversal attempt of the past few weeks and is reasserting itself once again. Weakness past late next week would obviously be very negative for USD and open the way for a much important decline into the end of the quarter. The 200-day moving average near 12,030 and the low of the month at 12,000 are clear pivots as are the 50% and 61.8% retracements of the May 2015 – January 2016 advance at 11,970 and 11,890.

Want to see what other traders in the market are thinking? Find out HERE