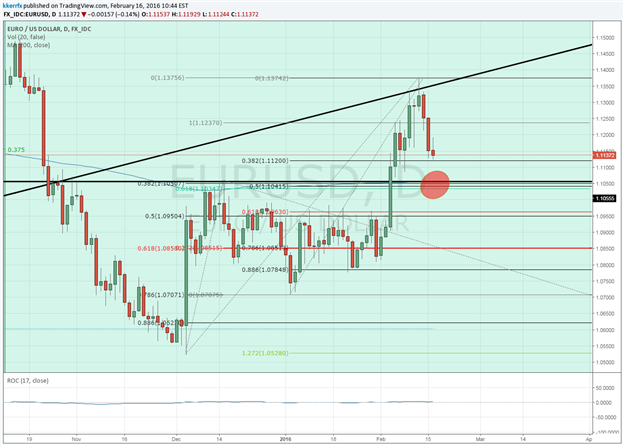 EUR/USD failed last week from just above the 1.1340 internal trendline that connects the March, April and August 2015 lows. A fairly sharp correction has followed, but the euro is still well above the key support levels of interest around 1.1050 (see below). My take on the euro has been fairly simple this year. Within the key long-term support/resistance zone (symmetry lines related to 1995 high and 1985 low) between 1.0600 and 1.1600 I am fairly neutral on the pair. A breach of one of those levels is really needed in my view to set off anything meaningful from a longer-term directional standpoint.

In the shorter-term, the break from the multi-week sideways range earlier this month occurred at the ‘right time’ as it coincided (+/- a day) with the 100% retracement in time of the March - August 2015 advance. Interestingly the 61.8% retracement in time of this same move occurred at the lows in December. As a result, I have been open to this move extending to test more important resistance perhaps even as high as the critical 1.1600. The turndown from trendline resistance last week (at the end of a “Gann death zone”) now has me doubting this take, but ultimately it would take a move under the 1.1060/35 zone to invalidate this positive short-term view.

The 1.1060/35 area looks to be a key action/reaction zone for a variety of reasons, but mainly because it is such a clear area of confluence. Between 1.1035 and 1.1060 there is the December high, the 200-day moving average, the 38% retracement of the December – February range, the 50% retracement of the year-to-date range and the 3rd square root relationship of the year’s high. Individually these are levels that I would want to be aware of, but their close proximity suggests this should be a key pivot zone for the euro. Traction below this zone would warn that the move off the December lows has only been corrective, while a successful hold above would reaffirm breakout from earlier in the month and open the door to a more important test of resistance in the weeks ahead.