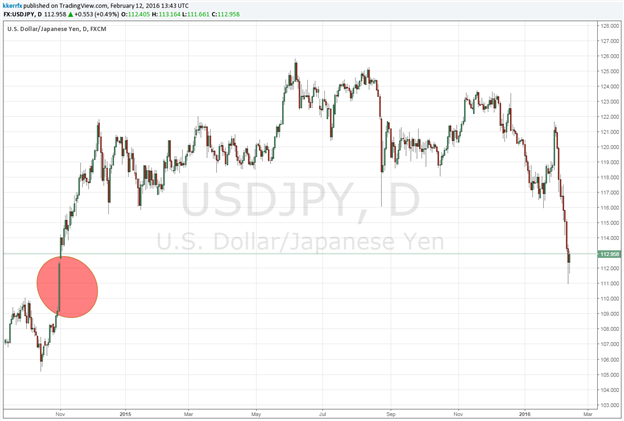 USD/JPY has grabbed the attention of the FX markets again with its fall to a 110 handle yesterday. The debate is now raging on intervention and the potential levels where Japanese authorities might step in. As for yesterday’s dramatic intraday volatility it is still unclear whether that was anything official or a spoof, though there were various reports of the Bank of Japan “checking rates” around the time of the turnaround in spot.

Technicals aside for a moment, one has to think that the 109.17 – 112.47 daily range from October 31 2014 will be of keen interest for Japanese policy makers as that was the day of the surprise QE announcement from the BOJ and when Japan went “all in” on “Abenomics”. The psychological significance there is extremely high and with good reason. I suspect the BOJ/MOF does not want to see that zone easily broken so at a minimum things should get sticky around current levels. The wild card in all this is the G20 meeting at the end of the month. Do Japanese authorities really want to risk coming under scrutiny by intervening “loudly” in USD/JPY? Probably not, so if there is an official hand in the market it is probably going to be operating covertly unless forced to do otherwise. I was always taught never to fight a central bank that is trying to weaken its own currency as they theoretically have unlimited amounts of supply, but the SNB last year has rendered that type of thinking “old school” especially in a world with limited crumby alternatives. Under 109.00 risks the decline in spot getting out of hand. Strength above yesterday’s 113.58 high would relieve some of the immediate downside pressure, but only over 115.50 puts USD/JPY on sounder footing.