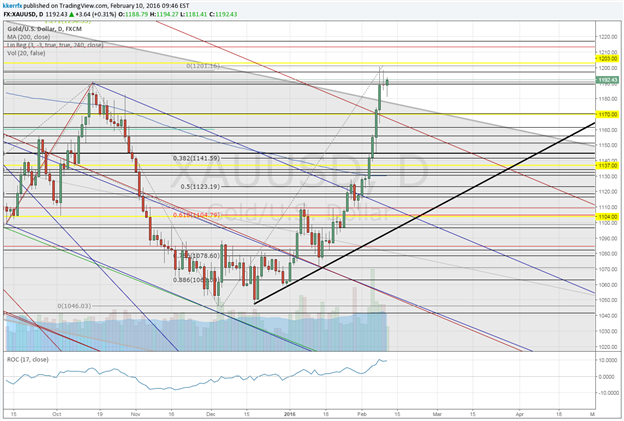 Gold – Is the Bear Market Finally Over?

GOLD – Is the Bear Market Finally Over?

The move in Gold over the past week or so has captured a lot of attention and is rather exciting as it is the first real evidence of an impending behavioral change in the precious metals complex. I say this because Gold has rallied sharply many times during the last four years, but has always failed to surpass a previous swing point high. The move on Monday finally did that albeit only briefly. Daily closes are usually what matters most in commodities, so I would really like to see a settlement above 1191 to solidify a more meaningful shift.

However, time seems to be working against the yellow metal in the near-term as a confluence of various relationships over the past few days and early next week suggest the commodity is vulnerable to stalling out here and possibly even embarking on a bigger correction. The big question mark for me timing wise is the start of the second quarter. Many long-term timing relationships are converging there and it looks very important. I have generally believed that if the metal is going to really turn things around and embark on any sort of meaningful move higher this year then it would probably have to put in a low sometime around late March/early April. I had been looking for a move under $1,000 an ounce into this timeframe, but obviously, the rally over the past few weeks makes this much less likely. A higher low over 1046 looks possible, but let’s see how things shake out over the next few weeks. Somewhat counterintuitively, the biggest risk I see to the bullish Gold argument in 2016 is a continuation of this rally into next quarter, as this would set up a more important downside reversal. Time will tell I guess. In the near-term 1191 and 1203 look to be clear upside pivots, while weakness under 1170 would warn a correction is unfolding.