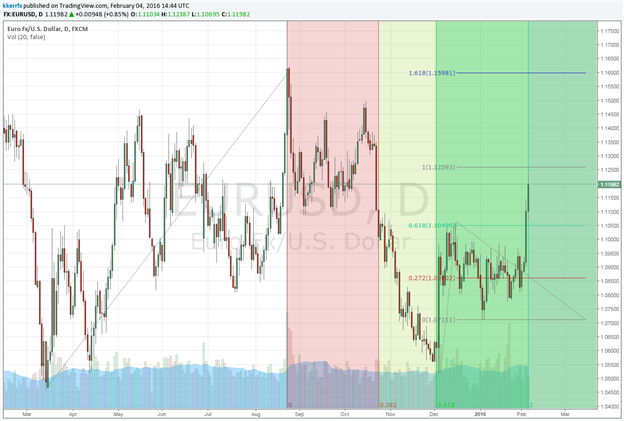 EUR/USD – Was it Just Time to Breakout?

EUR/USD – Was It Just Time To Breakout?

Fibonacci time retracements related to last year’s March – August rally in EUR/USD have been incredibly useful of late. In December the exchange rate looked to be on the verge of an important break of 1.0500 and then turned sharply higher at the 61.8% retracement in time of that move (+/- a day). A consolidation then followed which saw the euro trade in a pretty listless range until yesterday which was the measured move in time (100% retracement) of that March – August advance (again +/- a day). Interestingly the exchange broke out from this range during this “turn” window and has followed through today to trade at its highest level in over three months. Is this the start of a more important run higher?

On the face of things, it would seem so – at least in the short run. As I wrote about last week, I generally like to look for a reversal counter to the short-term trend heading into these windows (like USD/JPY at the start of the week).In the euro the trend was sideways heading into yesterday so it favored a potential breakout. The move through the December highs obviously suggests a more important short-term move higher is underway. The measured move in price of the December range around 1.1260 looks like the next big hurdle for the market with a move above there needed to set off a more important counter-trend advance. In the bigger picture, spot is still a long way from anything pivotal. An internal parallel line related to the 1995 high in the ECU capped the market back in August and would come into play around 1.1600. While below this level, the broader technical prospects for the single currency remain grim. Under 1.1025 would force a near-term rethink.