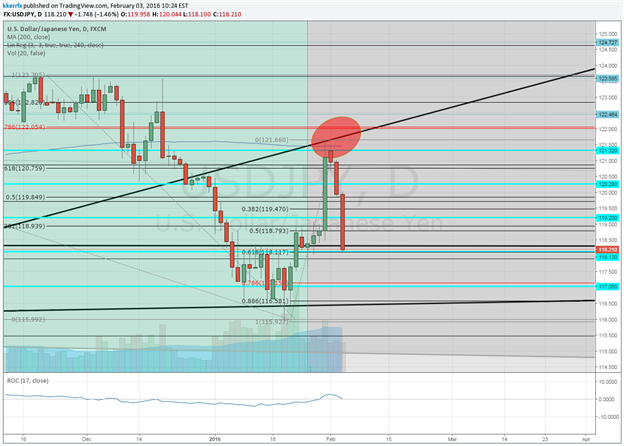 I last wrote about USD/JPY on Friday after the BOJ had made their surprise announcement to implement negative rates. Given the convergence of timing relationships (Armstrong Pi cycle of 8.6 years from 2007 high) with the meeting of the central bank, I was not that surprised that we got some fireworks. I suggested that Monday and Tuesday of this week could prove pivotal as there was plenty of risk that spot would fail against resistance between 121.50 and 122.00 (it was also my analyst pick, which you can read HERE).

This 121.50 122.00 area was/is important as it marks a confluence of several key levels including an internal trendline connecting the October 2014 and August 2015 lows, the 200-day moving average and the 61.8% retracement of the June - January decline. After stalling out within this resistance zone on Friday the exchange rate underwent a secondary failure against this resistance on Monday, which has led to an aggressive move lower over the past couple of days that has seen all of the BOJ inspired gains from Friday erased at the time of this writing. Given Friday’s high coincided with important timing there is a clear possibility that this move down marks the start of a much more important leg lower. The 78.6% retracement of the year-to-date range around 117.00 is now a key downside pivot with a break below there setting up a full retracement to last month’s low. Last month’s low is critical from a long-term technical perspective as it has such negative implications if it convincingly gives way. Gann levels around 119.15 and 120.30 are important on the upside with a move above the latter needed to neutralize the immediate negative tone in the exchange rate.