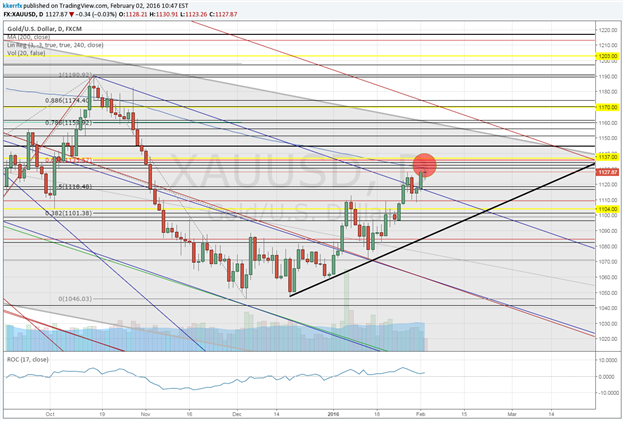 A lot has been made of the recent rally in Gold. I am still pretty skeptical. Now do not get me wrong I am pretty positive on the metal in a longer-term sense. In fact it is my trade of the year for 2016 (read HERE), but I have seen this movie so many times before over the past few years.

The rally that has unfolded from mid-December came from a very oversold condition. It has not tested anything meaningful on the upside in terms of resistance really until yesterday. The 200-day moving average and several key Fibonacci retracements all converge around 1130/35 and this should be the first real test for the metal. If it can get through there then we can start talking more seriously about a bona fide reversal, but even if that occurs I still think spot needs to overcome the October highs around 1190 to signal any real sort of true behavioral change. I say that because the bear market in Gold since 2011 has been littered with plenty of rally attempts that never seem to muster enough strength to overcome a prior important swing point high. If Gold can manage that then it will probably be enough evidence that the winds are truly beginning to shift in the metal.

A big reason I have been skeptical of this rally in Gold outside of timing (several important timing relationships around the start of Q2 seem to favor another leg down), is the behavior in other precious metals. The rally in Silver has been less than impressive, as has the action in Platinum. Like Gold, both have been in strong bear markets since 2011. The action here in both looks more like a bearish consolidation than a base before turning sharply higher. Things can change obviously, but the burden of proof is still squarely on the bulls. In Silver over 14.60 opens the door to a more important upside correction, but only above 15.40 material changes the medium-term technical landscape. The same can be said for Platinum with traction above 896 needed to trigger a more important corrective process, but only a move over 926 would materially alter the negative technical picture.