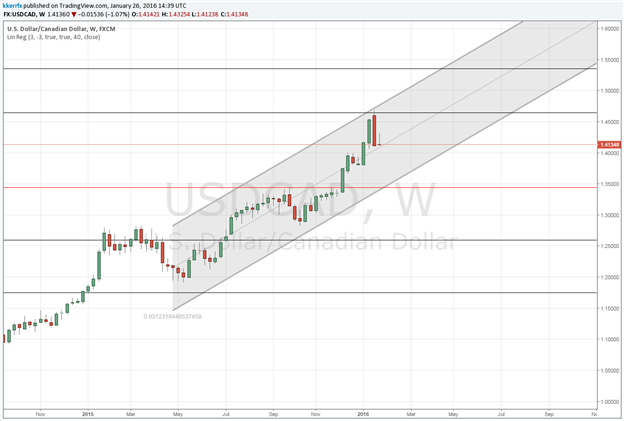 I have been banging the sentiment drum of late, as we have gotten to some pretty extreme levels of negativity in a few key markets. I usually talk about the Daily Sentiment Index or DSI as it is a simple metric to grasp that is very reliable at alerting one to dangerous technical conditions where a trend is prone to subside or at least stall out. Another sentiment metric I follow is actually calculated by a third party service that is a compilation of various sentiment surveys including DSI, Ned Davis and a few others. As it is a compilation index, it is much slower moving, but when it reaches extremes, it is highlighting a much deeper and pervasive feeling of negativity in the market. As a contrarian, this obviously really intrigues me.

Looking for real-time forex market sentiment & positioning? Get it HERE

Last week the Canadian Dollar reached its lowest level ever on this survey! Given this extreme condition, it is not that surprising that USD/CAD reversed pretty sharply (carving out an outside candle on the weekly chart) after testing the top of the 1-year standard deviation channel and the 78.6% retracement of the 2002 – 2007 decline around 1.4650. The thing everybody is trying to figure out now is whether that was just a minor setback from an obvious overbought condition or the start of something more significant on the downside. The burden of proof is most definitely on the bears here, but given the levels where we failed and the level of sentiment we reached a more protracted correction period would not surprise – especially if the next rally attempts fails (leaving a secondary high).

Gann levels at 1.4085 and 1.3965 are clear downside pivots, but a move under last month’s consolidation lows are really needed signal that a much more serious correction is taking hold. Traction over 1.4650 would obviously undermine this burgeoning negative view.