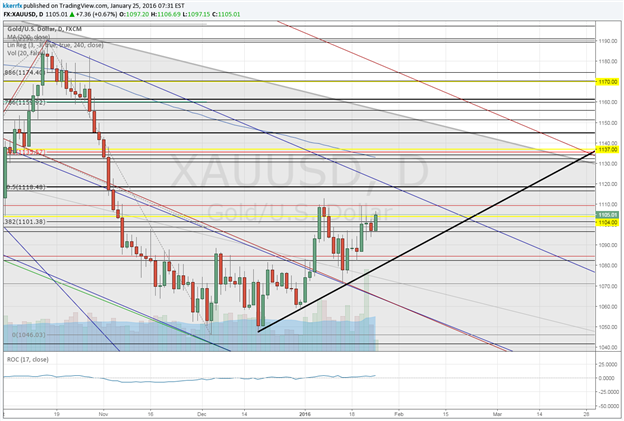 I have been looking for an important reversal in Gold in 2016 (Read Here). The downtrend that commenced in 2011 is ‘long in the tooth’ from both a cyclical and historical point of view and have, I suspected that the metal would come back into favor at some point this year. My focus for an important low has been around late March/early April as it marks a nice convergence of several important cyclical relationships including the 38% retracement in time of the 1999 – 2011 advance, although it is worth mentioning that November also will some interesting long-term timing as well.

Looking for real-time forex market sentiment & positioning? Get it HERE

All that said, this rather persistent strength in XAU/USD this past month and a half has caught me a bit off guard. If I am right about the longer-term cyclical picture then the metal should run into both time and price resistance here shortly. My dilemma from a short-term point of view really comes from the double lows last month as the absolute low occurred a good two weeks before the closing low. If the absolute low is the more important one then the metal rally should be at risk of petering out over the next few days. If the closing low from December 17 is the greater influence then that time resistance obviously is shifted out a couple of weeks. Continued strength in the commodity after the first week of February would raise the probability, in my view, that a more important low is already in place, but ultimately I will need to see traction above the mid-October high around 1290 to break the successive strings of lower highs and confirm an end to the 5-year down cycle.