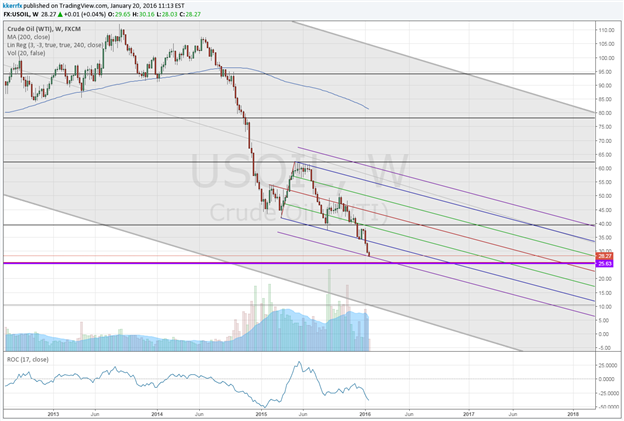 US Oil: What Would Nathan Rothschild Be Doing?

The two most dangerous words you can write in a research piece these days (or some variation thereof) is “crude bottom”. I have stayed clear of the commodity as it has been one of the more persistent declines in recent memory, perhaps only really rivalled by the decline in crude in 2014-2015 which on some technical metrics was one of the most ‘oversold’ markets ever. All that said things are starting to get really interesting from a contrarian point of view and I am wondering if we are close to (gulp) a near term bottom?

Given my contrarian bent, I follow sentiment figures very closely. Whenever they get to extremes it is often the time to start at least entertaining the possibility of a move against the direction the crowd is leaning in. One of my favorite sentiment metrics in addition to FXCM’s proprietary SSI data (See it HERE), is the Daily Sentiment Index or DSI for short. The DSI is a daily survey of trend following retail futures traders that records the bullishness in a variety of currencies, commodities and indices. The survey records these attitudes on a daily, weekly, bi-weekly and monthly basis. Under 5% bulls on a daily time frame is often a strong contrarian precursor to a bounce. More important reversals are another story, but generally speaking when DSI falls under 10% bulls in all time frames it is a strong sign that the market has too many participants leaning the same way. As you have probably already guessed by now we are very close to achieving this on the DSI as last night’s data showed sub 10% bullish readings in all time frames except on the monthly. However, it is not far off as it came in at 10.5% bulls. We had a similar dynamic last year before that 50% ‘bounce’ in the commodity.

What I do not like about the current landscape is precisely what this corner is called – Price & Time. The timing relationships here are not the greatest and I have been focused more on the latter part of the quarter for anything meaningful develop. It also does not help that the commodity blew through the 17-18 month bottoming window late last year as that argues this trend remains incredibly strong. Price is a little better as the $25-26 area has a couple of nice long-term supports including the often forgotten 88.7% retracement of the 1999 – 2008 advance and the 10th square root relationship of the 2008 high. If we are going to see any sort of extreme sentiment driven recovery develop then somewhere around there is where I would expect it. A material break under $25 and things could get even uglier.