Price & Time: USD/MXN: Eastbound and Up?

USD/MXN: Eastbound and Up? 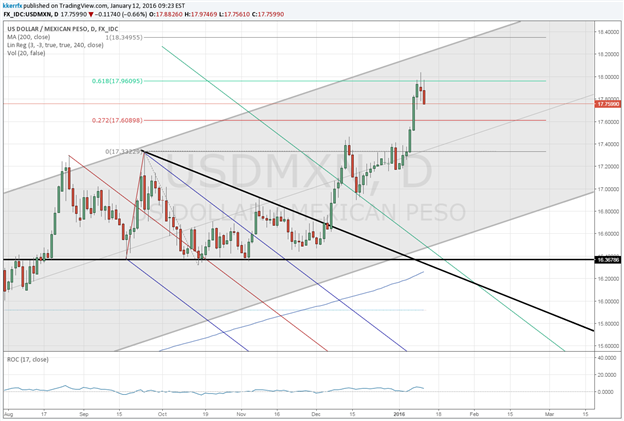 There is a lot of confusion surrounding the analysis of time and understandably so. Technical analysis is already considered a “dark art” by many, but factor in that time analysis is one of the lesser studied branches of the “field” and there is plenty of scope for misunderstanding and misinterpretation. One of the biggest sources of misunderstanding in time analysis is the notion that every cyclical relationship has to yield a reversal. While cycle work can alert you to potential turns, I think it is a very limited way to use timing analysis. I actually think cyclical pivots are often just as useful when they break as when they yield a turn. One of my former mentors probably explained it best. He would say, “Timing relationships are like exits on the highway”. The way I always interpreted that was that the timing relationship (exit) presents the trend an opportunity to turn. If it does not take it or only briefly stops it is going to continue in the direction it was already going, and probably aggressively so.

USD/MXN and many other emerging market pairs are a great recent example of this concept. Late September was an important time for the exchange rate as a variety of different relationships were converging then including Martin Armstrong’s ECM. The pair initially reacted to the timing pivot by selling off, but this move lower could not gain any real traction on the downside and quickly turned into a consolidation. This consolidation was followed by a break back through the September 17.3400 high in December which effectively invalidated the negative cyclical potential. Much in the same was that a break of price support/resistance often signals a continuation of the primary trend, the same can apply to the x-axis of time. In this case, the move back through the September high has seen the broader uptrend in USD/MXN reinvigorated. The reaction low in mid-December around 16.9000 is now an important pivot with strength favored while above this level. In recent days the market has found resistance around the 161.8% extension of the September – October decline near 17.9700. Traction above looks needed to set off a new leg higher in the rate.