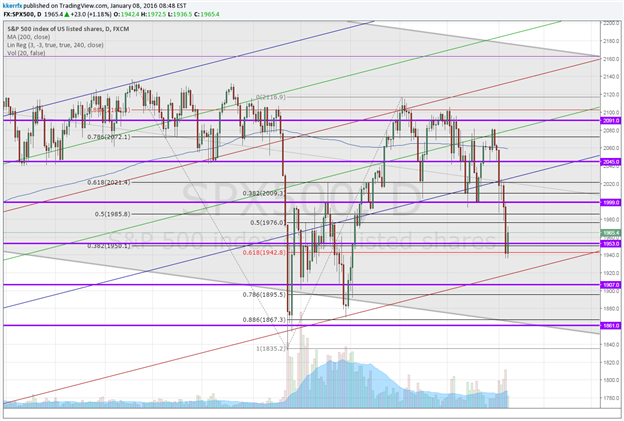 It has certainly been a tumultuous start to the year for US equities. On Monday, the stock market had its worst opening day since 1932. Since then rally attempts have been brief and uninspired. Judging from this action it would seem that stocks are destined for a more important move down. When you take into account the lack of breadth all last year, the broader potential topping pattern on the monthly charts and the failure of the S&P 500 to surpass 2135 high in 4Q I can certainly see where all the bearishness is coming from. What bothers me is the time of year that all this aggressive weakness is occurring in. The first few weeks of the year are somewhat notorious for being volatile. P&Ls have been reset and traders are generally nervous about starting the year off wrong. As such, it is not that uncommon to get a shakeout in the first few weeks of January. Is that what is going on here or is this the real thing?

I think we are about to find out. One of the strongest indicators for identifying oversold equity markets over the past few years has been the DSI (Daily Sentiment Index) in the S&P 500. The DSI is a daily survey of small futures traders that polls their degrees of bullishness in a variety of currencies, commodities and indices. It is a contrarian indicator and whenever it reaches below 10% or above 90%, it is usually a strong sign that too much of the market is opining the same thing. In the S&P 500, it has been particularly remarkable over the past couple of years whenever it has dropped to around 5%. For instance, in October of 2014 before the infamous Bullard speech, we touched 5% bulls the day before and we all know what happened after. This past August when stocks were melting down the DSI actually touched 4% bulls right before we turned up. Even last month the DSI dropped to 5% bulls right before the rally into the end of the year. As you have probably guessed, I am writing today because the DSI fell again to 5% bulls this week. If this is just a “beginning of the year shakeout” then the conditions are certainly ripe for a squeeze. What I do not like about the current situation is the fact it is coming on the heels of that 5% reading less than a month ago as it suggests a more pervasive negative tone and technical backdrop. If this weakness has just been a misdirection move then the S&P 500 has to get back over 2020 in short order (within in next few days). A close under 1918 would confirm a more important technical break and set the stage for a potentially harsh decline over the next few weeks.