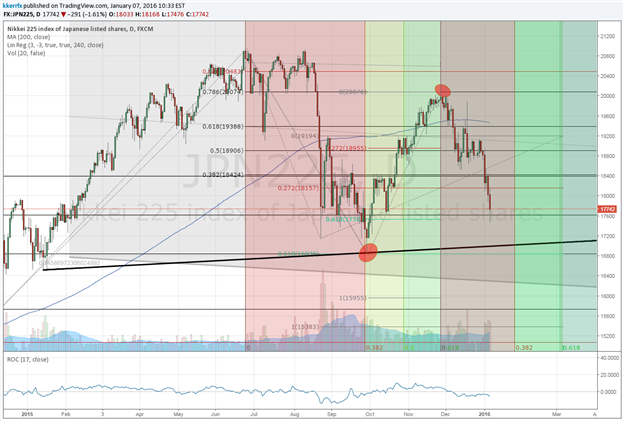 "When you look into the abyss, the abyss looks into you."

The Fibonacci timing symmetry in the Nikkei 225 has been pretty remarkable over the past few months. In late September, the index reversed right from a convergence of the 38% retracement of the time elapsed between the October 2014 low and the June 2015 high and the 61.8% retracement in time of the June – August decline. In late November, the index then reversed again at the 61.8% retracement in time of that same October 2014 – June 2015 advance. I actually wrote about this potential turn a few days prior in Price & Time:

“Indices rarely go up in a straight line, however, it wouldn’t surprise me to see some sort of “gut check” before getting another push higher as the index is starting to show some signs of fatigue. The big price hurdles look to be the 78.6% retracement of the June - September decline around 20,075 and the 88.7% retracement of that same move near 20,485. Timing wise, symmetry related to the advance from October of last year to this past June has proven influential twice already this year and the 61.8% retracement in time of that move is later next week. In my view a continuation higher into this period raises the risk of another setback…”

The Nikkei actually did rally into this turn window and reversed a little shy of that 78.6% retracement, but the decline that has followed is obviously more than a minor “gut check”. Like in USD/JPY, we are now getting perilously close to the neckline of a year-long head & shoulders pattern that has much broader negative technical implications if triggered. Watch the 17,000 area closely if this weakness persists. Given the influence the October 2014 – June 2015 advance has had on the Nikkei over the past few months early March looks important as it will be a 100% retracement in time of that move. Late next week also has a few minor timing relationships that could spur a rebound, but traction over 18,900 is really needed to improve the medium-term technical outlook.