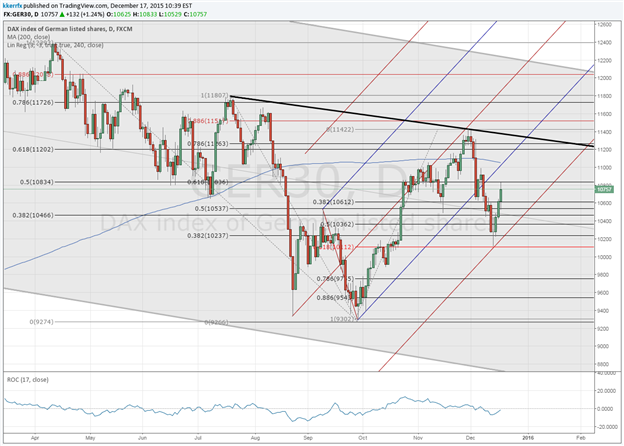 DAX: Was Monday the Retest?

The rally in global equities since Monday has been impressive. December positive seasonality is nothing short of remarkable and it very rarely pays to bet against it. So is this the much-anticipated “Santa Claus rally” that everybody has been looking for? It would seem so in the S&P 500 after yesterday’s close above the 200-day moving average, but other indices continue to lag.

One of my favorite equity markets outside of the US has been the DAX because it bottomed right during the Martin Armstrong Economic Confidence Model turn window at the end of September. This is a capital flow timing model and I have found when markets turn during these key windows it often marks an important change. With that in mind, I have been looking for evidence of a secondary low since late September (i.e. a retest) and cannot help but wonder if Monday’s turn was it? The 10,110 level from where the index reversed was quite compelling as it marked a convergence of the 61.8% retracement of the September to November advance and an external parallel of an Andrews pitchfork drawn through the September range. One could make that this week’s low also marks the right shoulder of an inverse head & shoulders pattern, but confirmation is a long ways off as it would take traction over 11,300 to set into motion such a positive scenario. In the immediate future, the 50% retracement of the April – September decline near 10,825 looks to be a key hurdle with strength above eyed to set off a push towards the 200-day moving average around 11,060. Immediate support is seen at 10, 465, but only weakness under this week’s low turns the technical picture more overtly negative.