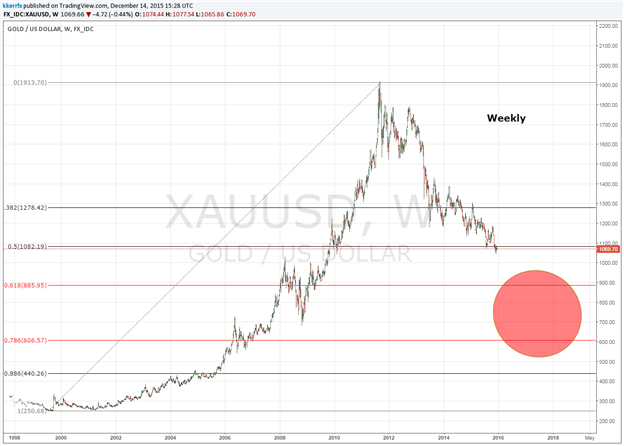 Price & Time: Gold – The Year Ahead

Gold: The Year Ahead

I like Gold in 2016. From a contrarian sentiment and positioning standpoint, it seems to be setting up quite nicely for turnaround next year. The two big questions though are from what level and when?

Since the top in 2011, I have been viewing this move down as a counter-trend decline within the context of the broader advance that commenced in 1999. The decline through the 50% retracement of the 1999 – 2011 advance around 1080 keeps the metal vulnerable to susceptible to some further weakness below 1,000 oz. If we do get this push lower, my idealized zone from where a meaningful low could form is somewhere around 885 and 600 as it marks the 61.8% and 78.6% retracements of the broader advance.

Timing wise the low earlier this month could be significant, but the start of the 2nd quarter looks to be a more important attraction from a timing perspective as it marks the 38% retracement in time of the 1999 -2011 advance and the 161.8 extension in time of the 2008 – 2011 advance. Continued weakness into this timeframe would be interesting indeed and raise the probability, in my view, for a more important low. November of next year also looks potentially significant from a timing perspective, as it will mark two Armstrong Pi cycles of 3,141 days from that all-important low in 1999. Any strength back through 1200 would also warn that a low of some significance is already in place.