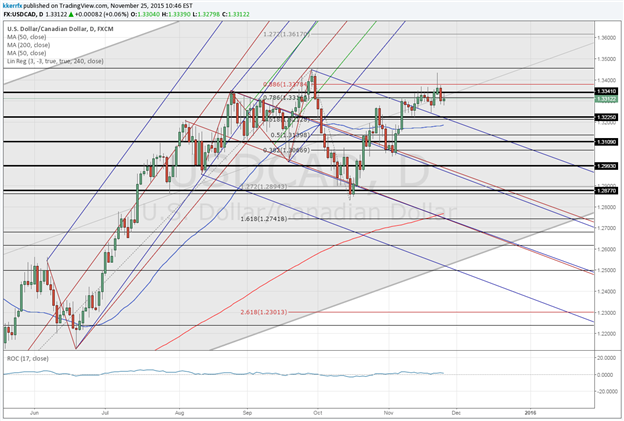 I think USD/CAD is at an important inflection point in time. As noted a few weeks back, the second half of last week had some important timing relationships including the 50% retracement of the time between the 1974 low and the 2002 all-time high and the 38% retracement of the time elapsed between the May low and the September high. The second half of this week is the 61.8% extension in time between the last year’s July low and this year’s May low as well as the 100% time projection of the March – May decline as measured from the September high.

Normally I would treat these as two separate potential turn windows, however, their proximity to each other leads me to believe they should probably be treated as one big one. A cyclical technique that can be used when this type of situation arises is to interpolate or focus on the mid-point between the two. Interestingly this actually coincides with the Monday’s high. We’ll see. I am open minded here especially with the approach of the Thanksgiving Holiday in the US. Turn windows that coincide with regional holidays usually need some extra attention with the thinner liquidity.

As far as levels go the 1.3460 area remains the zone to watch. Obviously it is where the market stalled out in September but it marks the 61.8% retracement of the all-time high recorded in 2002 and the all-time low recorded in 2007 as well as a golden mean rhythm ratio of 48.6% off the low from 2007. A failure around this zone would set up a pretty clear potential double-top. I could even see 1.3460 break convincingly and the fail leading to reverse symmetrical triangle top. Timing remains the key variable.

Bottom line a failure over the next few days somewhere around 1.3460 – 1.3500 followed by a clear change in behavior (i.e. break of support) would signal to me that a turn of some significance is underway while continued strength past the first part of next week would signal a much more powerful move higher is unfolding.