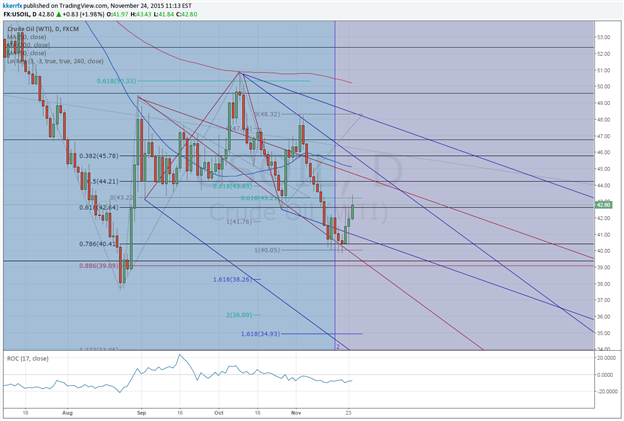 Oil is at an interesting juncture. Fundamentally it seems crude can only go down. Oversupply combined with overbuild has many thinking we get a replay of what happened to broadband in the early 2000’s. I am actually quite sympathetic to this view, but I wonder if myself and everybody else have just gotten too negative? According to the FT, short bets on crude have increased 60% on WTI in the past month and a half alone. I’d be remiss if I didn’t say such one way conviction in direction makes me a little nervous.

Timing elements in the oil market seem to suggest this paranoia might just be warranted as we have reached a point where the downtrend looks quite mature. We are now in our 17th month of this decline and 17 to 18 months is usually an important litmus test for any trend, but even more so for markets that have undergone intense liquidations like oil has since 2014. The S&P 500, for instance, peaked out in October of 2007 and bottomed in March of 2009 falling just a few days shy of 17 months. We all know what happened after. Now I am not saying the same thing will happen in crude. This is just an important mile marker for this decline. If it has run out of stream then now is about the right time for it to do so. What could follow is anybody’s guess, but traction over 45.80 would begin to give some technical credence to this line of thinking and set the stage for an important rebound at a minimum.

A close under last week’s low at 39.87 would clearly undermine some of the more immediate prospects of this potential positive timing, but new trend lows into month 18 still might be needed. However, continued weakness past the end of year would make the “broadband analog” a lot more compelling.