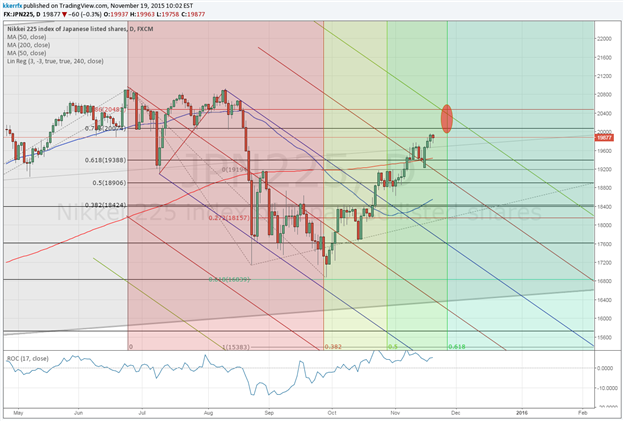 It doesn’t usually pay to be short equities into year-end. In fact, I read somewhere today that the S&P 500 hasn’t had a negative December in 13 years. This positive seasonal tendency extends into most global indices too as the FTSE, DAX and Nikkei are usually pretty strong in December. At the risk of sounding a little conspiratorial, I don’t think the reason for the “December Effect” is too difficult to figure out. The stock world is an inherently long biased organism. End of year strength benefits the system as a whole and the bigger players within it.

Looking at the various global indices the main thing that stands out to me is their underperformance versus that of US equity indices. That has started to change now and I wonder if they are about to play “catch up”. I last wrote about the Nikkei 225 in early October (read HERE) to highlight the important time symmetry at the late September low as it occurred at a convergence of the 38% retracement of the time elapsed between the October 2014 low and the June 2015 high and the 61.8% retracement in time of the June to August move down. The turn from this symmetry has led to an aggressive rally since then that could very well be a resumption of the broader uptrend. The seasonal tendency of December is clear a potential positive that favors this interpretation.

Indices rarely go up in a straight line, however, so it wouldn’t surprise me to see some sort of “gut check” before getting another push higher as the index is starting to show some signs of fatigue. The big price hurdles look to be the 78.6% retracement of the June - September decline around 20,075 and the 88.7% retracement of that same move near 20,485. Timing wise, symmetry related to the advance from October of last year to this past June has proven influential twice already this year and the 61.8% retracement in time of that move is later next week. In my view a continuation higher into this period raises the risk of another setback while a selloff into it would help work off some off the minor overbought condition and prime the index for another run higher.