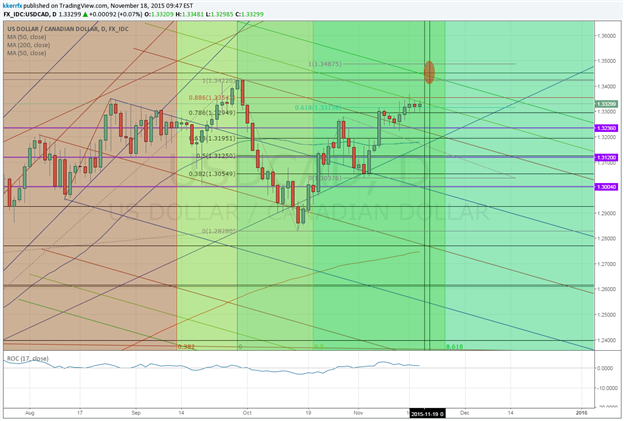 My focus is primarily on the commodity currencies this week as there is some clear timing symmetry setting up in both USD/CAD and NZD/USD. USD/CAD is potentially the more interesting one of the two as it is closing in on some important long-term resistance into the key dates at the end of the week.

In late September I was skeptical of USD/CAD being able to continue higher unchecked as the resistance at 1.3460 looked quite important given it was the 61.8% retracement of the all-time high recorded in 2002 and the all-time low recorded in 2007. It also marked a move of 48.6% off the low in 2007 which is a Golden mean rhythm ratio. All this to say, there is some pretty remarkable price and percentage symmetry around 1.3460 so the reaction around this level has been and should continue to be quite pivotal. A failure at or slightly below this level would set up a potential double-top, while a failure from not too far above 1.3460 would put into motion a possible reverse symmetrical triangle top. Timing is the more important variable for me over the next few days, so I am open to a fairly wide variety of reversal scenarios.

There is some seed of doubt as to how tight this timing window should be. I generally like to give the market up to three trading days to respond to long-term timing elements. That would throw us into Monday. Continued strength past Monday under normal circumstances would invalidate the potential negative cyclicality. Where the doubt comes from is the proximity of another decent turn window late next week as it marks the 61.8% extension in time between the last year’s July low and this year’s May low (among other things). There is a very real possibility that this just marks one larger week long turn window or that USD/CAD could just “ping pong” between the two. First things first, let’s see how USD/CAD responds over the next few days. A clear price action failure around 1.3460 would be enough to turn me negative on the exchange rate, while strength after Monday over 1.3460 will force a bit of a reassessment heading into the second half of next week.