Price & Time: Second Half of the Week Looks Incredibly Important For NZD/USD

NZD/USD: Second Half of the Week Looks Incredibly Important For Kiwi 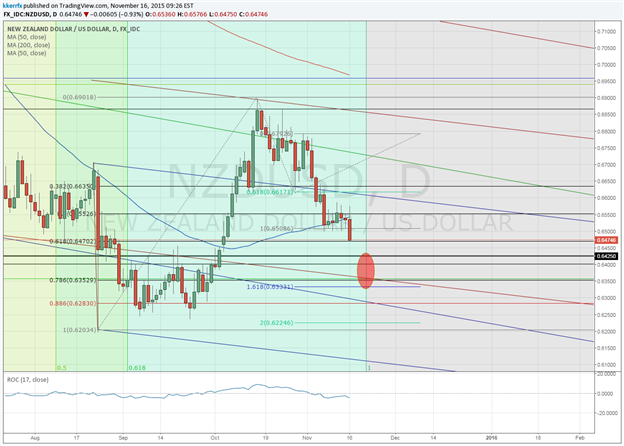 It is shaping up to be an important week for the commodity bloc currencies from a timing perspective. I have already highlighted some of the timing relationships in USD/CAD (read HERE), but some interesting relationships are also aligning nicely in NZD/USD. The most important is related to the Armstrong Pi cycle as Kiwi will be 1570.5 (1/2 Pi) calendar days from the all-time high in the exchange rate recorded on August 1st 2011. This relationship can prove pretty important in its own right, but when it coincides with other “unrelated” timing techniques my attention perks up. In addition to the Pi cycle relationship this week we also have the 38% retracement in time of the year-to-date range, the 38% retracement of the time elapsed between the 2Q high close and the year’s low close and the measured move in time of the decline from the 2014 high to this year’s 1st quarter low (measured from the 2Q high).

All this suggests to me that we get a reversal or at least an attempt at one in the Kiwi. I am focused on the latter part of the week as that is when most of the relationships coincide so continued weakness into this time frame is potentially bullish. The 61.8% retracement of the 2009 – 2011 advance around .6425 and the 78.6% retracement of the August – October advance near .6350 are levels I will be watching closely for signs of a turn, but ultimately time is the more important variable here so I am open to a reversal from lower levels. An aggressive rally from here into the end of the week would obviously change the script a bit as would continued weakness past Monday of next week.