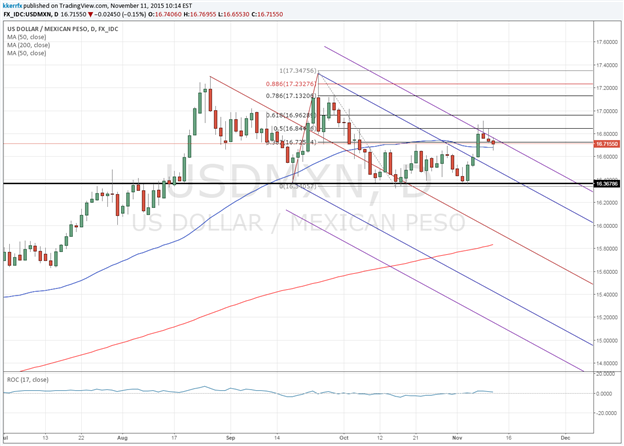 Emerging market currencies remain a bit of a question mark for me. Over the past few weeks EMs have been caught in between the positive sentiment being exhibited towards equities (and other so called risk markets) and a generally strong dollar (versus G10). In things like USD/ZAR and USD/PLN the positive dollar theme has clearly been winning out, while in others rates like USD/KRW and USD/BRL the pro-risk tone seems to be weighing heavy. Somewhere in the middle is USD/MXN which remains stuck between the September extremes of 17.3400 and 16.3650.

My views haven’t changed much on USD/MXN since I last wrote about it early last month. I am basically still waiting for clarity. The reversal in late September from around 17.3400 was very important from a timing perspective and opened the door to a potentially important corrective phase. However, the burden of proof for such a move has been and remains on the bears in my view as the weakness that has followed has not been very impressive. From a classical technical standpoint, what was looking like a promising double-top has morphed into an equally promising bullish consolidation pattern. In order to get excited about a more meaningful correction I would need to see USD/MXN close sub 16.3650 (ideally on a weekly basis), though I should point out another probe of this level would be the fourth time on this level since September. Fourth time tests often see breaks (Gann Rule of Four).

Truth be told, the more interesting move would probably be higher as a close over 17.3400 would invalidate a pretty important negative cyclical relationship and be a strong signal that the primary uptrend is reasserting itself. I still think the year-end dynamics mean this directional uncertainly likely gets resolved before then as the clock is ticking and participants would be forced to chase a break of the September ranges. There is some minor timing over the next couple of days that points a potential reversal attempt.