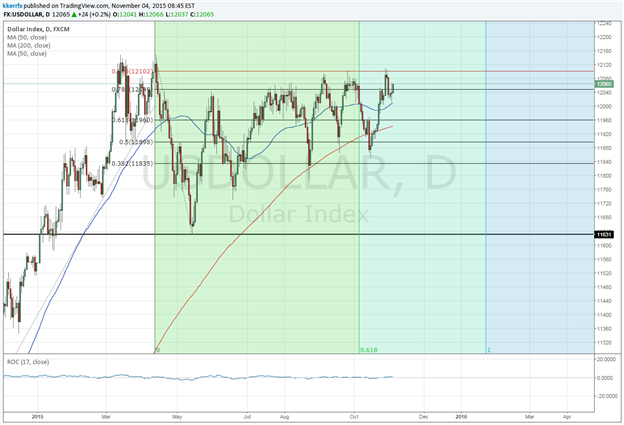 Price & Time: USDOLLAR – In Search of the End of Year Pain Trade

USDOLLAR: In Search of the End of Year Pain Trade

Waiting for a directional move in the Dow Jones FXCM USDOLLAR Index (equally weighted basket of USD versus EUR, JPY, and GBP & AUD) these past few months has felt a lot like waiting for Godot. Every time it seems we are about to get a meaningful break one-way or the other the index pulls back right into its familiar range. Last week for instance, the index touched its highest level in six months after briefly taking out its topside opening range for the quarter, but then just as quickly turned right back down.

At the risk of sounding like “the analyst that cried wolf”, I think this impasse should break relatively soon. A few things make me say that, but the approach of the end of the year is probably the biggest factor. End of year is incredibly important for the institutional community and the fact that the dollar has done nothing since April leads me to believe that nobody really has the positions on anymore. CFTC positioning data, although flawed, somewhat backs up this assertion.

The Index has failed three times over the past couple of months around 12,100 (which is the oft overlooked 88.7% retracement of the April – May range). Another visit of this level probably sees it break (Gann rule of four) and a weekly close over it could easily incite an end of year performance chase “pain trade” higher. Following six months of consolidation, I cannot help but think there is plenty of built up energy waiting to be released and with the end of year performance clock ticking I suspect it happens sooner rather than later. I would not rule out an end of year move lower just yet (especially given December seasonals are pretty negative USD), it just seems less likely to me here given current spot levels as it would probably take a move sub 11,850 in the USDOLLAR to trigger it.