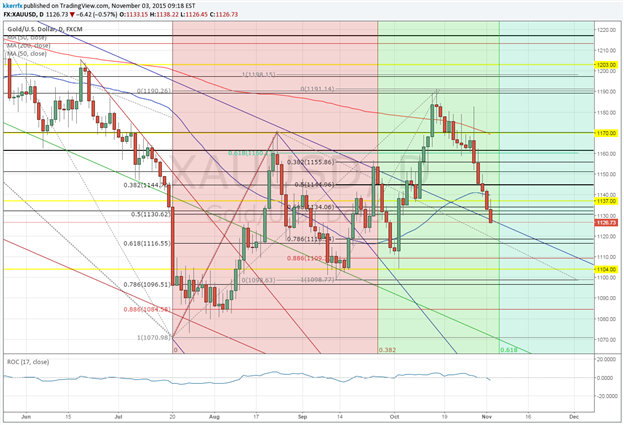 Price & Time: We Should Learn A Lot About Gold This Week

GOLD: We Should Learn A Lot About The Metal This Week

Gold failed last month near 1190 which is the 50% retracement of the year’s range. More important for me was the fact that the metal failed well shy of the measured move of the July - August advance at 1198 as it puts the metal in a bit of a precarious technical position. I say that because it raises the probability that the rise from 1071 has only been a correction within the broader decline.

The latter half of this week looks critical in determining what is really going on as it marks the 61.8% retracement in time of the year-to-date range. The 38% time retracement of the year’s range coincided with the late September high so this has clearly proven to be a useful influence in the recent past. It is also worth noting that a few other harmonic relationships related to some of the “zigs and zags” since July are also aligning late this week. I suppose this all means that if the medium-term uptrend has any hope of reasserting itself then the next few days should be when it tries to do so.

The 78.6% retracement of the September – October range and the 61.8% retracement of the July – October advance coincide around 1116/18 and this looks to be the key action/reaction zone going into the end of the week. There is some minor focus on 1100 as well, but I wonder if a move that far down would cause too much technical damage (triggers bear flag, etc). Ultimately the timing dynamics are much more important, but a failure to hold 1100/1118 come the end of the week would provide strong evidence that the broader decline in the metal has resumed. Even if the metal stages a recovery during this time as I suspect, I will remain skeptical of the broader implications while under 1198.