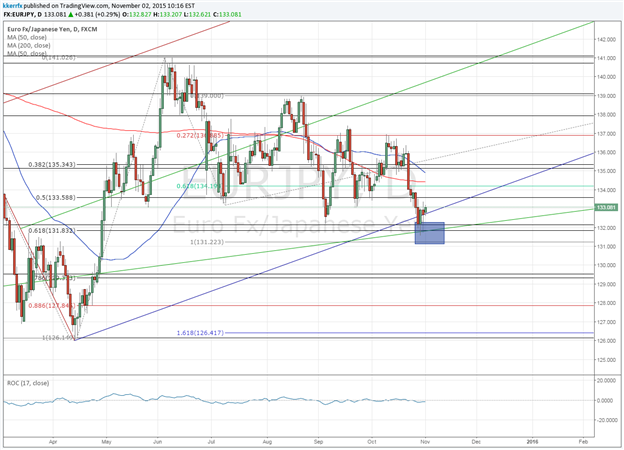 Price & Time: EUR/JPY - BoJ Out of the Way But Big Week For EUR/JPY

EUR/JPY: BoJ Out of the Way But Big Week For EUR/JPY

It is shaping up to be an important week for EUR/JPY from a timing perspective as a variety of different relationships will be converging over the next few days. The most important include the 38% retracement of the time elapsed between the 2012 low and the 2014 high, the 161.8% retracement of the time between the 2014 high and the year-to-date low and the 100% extension in time of this year’s July and September lows. All of these are noteworthy in their own right, but their confluence this week suggests the cross is likely nearing some sort of important inflection point.

The move down from the June high around 141.00 could be loosely described as a downtrend so I am on the lookout for a potential reversal over the next few days. There is a confluence of the 50% retracement of the 2008 – 2012 decline, the 61.8% retracement of this year’s April to June advance and the measured move of the June/July range (among other things) between the 132.15 and 131.20 so this looks like the key area to monitor for signs of a potential turnaround in the event of a downside retest.

A close under 131.00 would warn that the cross is accelerating lower during this turn window (similar to what EUR/USD did around a key Fibonacci time retracement late last month), while traction over 133.50 would raise the risk of a potential lower high. However, these are seen as the less likely scenarios for the time being.