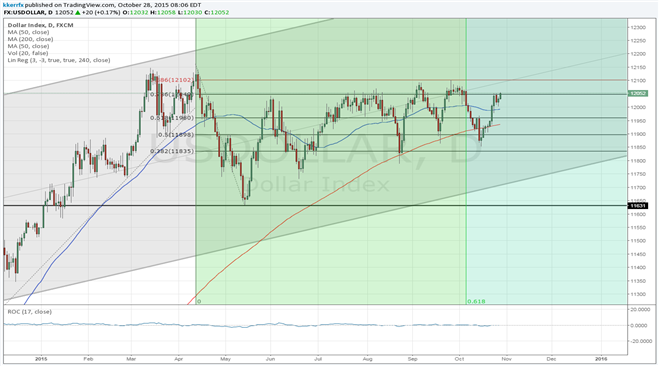 The Dow Jones FXCM USDOLLAR Index (equally weighted basket of USD versus EUR, JPY, GBP & AUD) has come storming back after being in a rather precarious technical position just a couple of weeks ago. Has the false break under the 200-day moving average finally primed the market for a breakout from the consolidation or is more range trade in order?

As mentioned last week, the timing seems about right in a lot of dollar pairs for an important move of some kind. It is also nearing the end of the first month of the 4th quarter and a trend move is probably due. I say that because the psychology in the first month of a quarter is not unlike the psychology that used to be witnessed in pit traded markets at the open when there would be a few false starts in the first hour of trading leaving a defined range. The break of this range or what many call an “opening range breakout” would usually lead to the first real directional move of the day.

The Q4 opening range in USDOLLAR looks set at 12,081 on the topside and 11,854 on the low end. A break of one should prompt that much sought after first “clear” directional move of Q4, though I might bump up the top level to the late September high near 12,100 as the index has had problems there on more than one occasion. I am biased higher following the shenanigans around the 200-day moving average, but will need to see a daily settlement over 12,100 to get excited about the prospects of a more impulsive move higher.