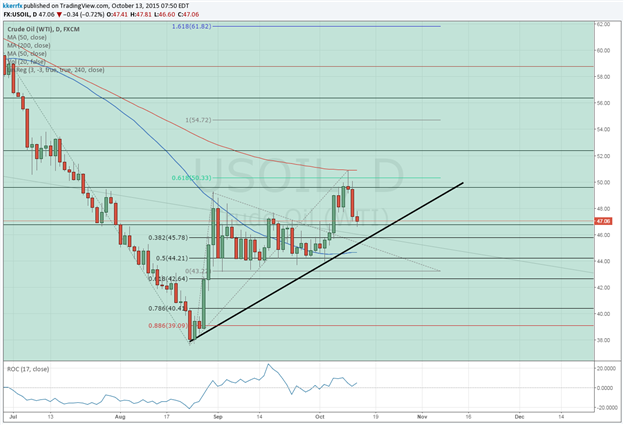 As I wrote last week (read HERE), next month looks pretty critical from a longer-term timing perspective as several key relationships will be converging during this time including the 161.8% of the time elapsed between the 2008 and 2011 highs and the 200% extension in time of the 2009 – 2011 advance. Whether we get a rally or selloff into this key timing period likely depends on what happens over the next week or so. I say that because last week’s high also came at an important short-term cyclical juncture. If the move off the high is only corrective it should start to turn back up before the end of the week and break through the 200-day moving average shortly thereafter. If Friday’s high denoted something more significant on the topside then continued weakness past Friday would be the giveaway.

From a price standpoint I see an initial support/pivot around the 38% retracement of August – October range near 45.80, but it would probably take a daily close under the September closing low at 44.09 to inflict any sort of real damage to the technical structure of the commodity. On the upside, the 50% retracement of the June – August decline has proven significant especially on a closing basis, but traction over the 200-day moving average at 50.88 is really needed to signal the start of a more important push higher in WTI.