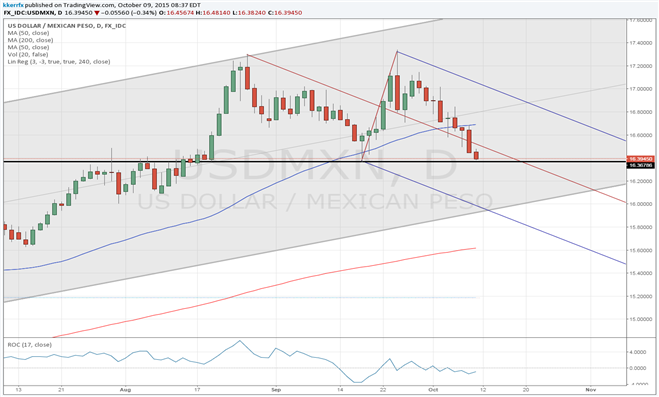 The start of the 4th quarter has been eventful. Several key market trends from the beginning of the year have been getting tested and in a big way. From a currency perspective, the most interesting and perhaps the most important is the turnaround in emerging market currencies. USD/ZAR, USD/MXN and USD/SGD (just to name a few) have all come under steady and aggressive pressure since the start of the month. The biq question now is whether this marks the beginning of a more pronounced move into the end of the year for EM?

Reversals around the start of a new quarter always make me a little suspicious and especially when they happen around 4Q. End of year performance numbers are at stake for many institutions and the fear of missing out on a trend (or getting trapped in a stale one) is usually pretty high. The anxiety this produces can often lead to a few stutter steps before the real trend of the quarter emerges. Essentially this is the psychology behind opening range breakout methodologies. What makes this a little different is the fact there was some pretty decent timing in the dollar around the end of September. Seasonality in 4Q isn’t the greatest either for USD looking back some 30 years so that is another potential negative factor at work. I am respecting this move lower in USD/EM and all things considered it would take a move back through those September/October closing highs to signal that we have indeed had a start of quarter misdirection. Such action would be incredibly bullish in my opinion.

On Thursday, USD/MXN broke below the median line of the late August high. Focus now is on the September low around 16.350 as traction below there would trigger a multi-week double top and set the stage for a deeper decline. There is some cyclical risk for a rebound attempt early next week, but the more important timing window for a turn in USD/MXN looks to in about a week. The 50-day moving average around 16.5800 is immediate resistance, but only aggressive strength back over 17.1200 turns the technical picture positive.