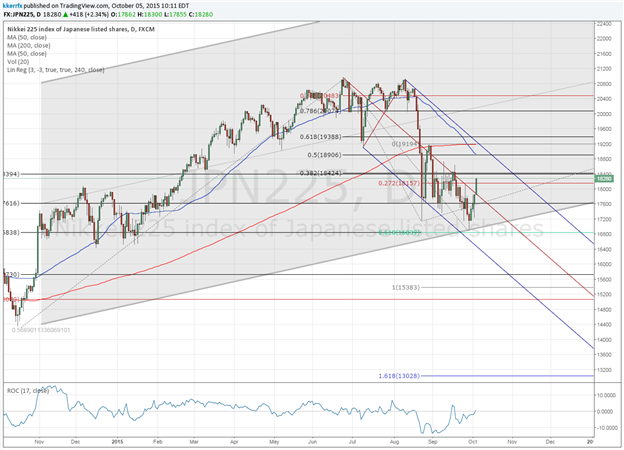 The Nikkei 225 (FXCM CFD) reversed last week from just above a convergence of the 61.8% retracement of the October 2014 to June 2015 advance and the 61.8% projection of the June to August decline in the 16,840 area and the bottom of the 1-year standard deviation channel. Interestingly this reversal also occurred on the 38% retracement of the time elapsed between the October 2014 low and the June 2015 high as well as the 61.8% retracement in time of the June to August move down. A better example of price/time symmetry would be hard to find!

The big question now is whether last week’s undercut of the August 17,158 low in the Nikkei marks some sort of successful retest ahead of another Q4 ramp or just an oversold bounce? End of year dynamics are usually a powerful force in all markets, but especially so in equities so this needs to be watched closely. How the index reacts around former support in the 18,400 should prove to be an initial litmus test for bulls, but the more important zone looks to be around the 200-day moving average near 19,200 as traction above there would signal a much more important change in behavior.

Timing wise the index is not out the woods yet as the second half of October is historically a potentially tumultuous time for global equities, but especially so for the Nikkei as multi-decade seasonality shows it is one of the worst times of the year in Japanese shares (as is early November). However, given the price/time symmetry at last week’s low only aggressive weakness back under the September closing low at 17,175 would warn historical negative seasonal dynamics are taking over.