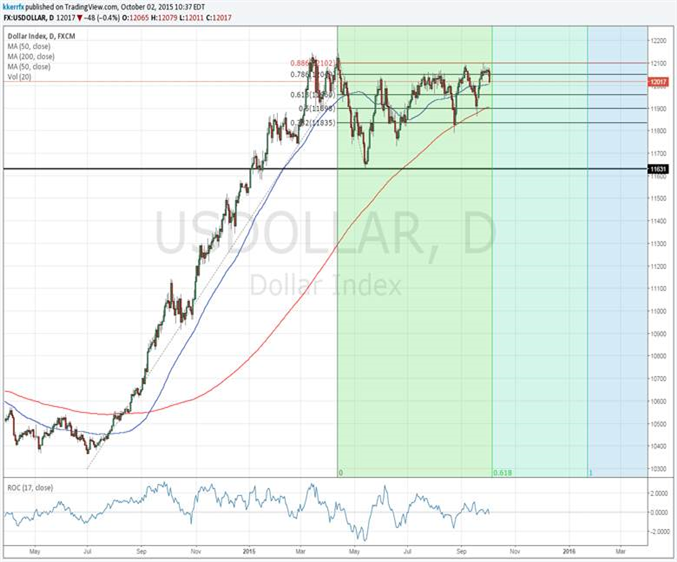 The weaker than expected payrolls print this morning has spooked the FX market and the USD in particular. It is amazing what the headline number can look like when the seasonal birth/death model isn’t helping.

The double failure in the FXCM US Dollar Index (equally weighted basket of USD versus EUR, JPY, GBP & AUD) from the often forgotten 88.6% retracement (square root of 78.6) of the April – May decline puts the index in a weak short-term position here, but it also seems a little early to be sounding the alarm bells - at least just yet. I say this because the index still looks fairly sound technically in the medium-term. Two successive holds of the 200-day moving average in August and September within a narrowing range following a strong uptrend lends the benefit of the doubt to the uptrend eventually resuming.

The way I look at things it would probably take a daily or even a weekly close below the 200-day moving average (currently around 11,900) to signal this consolidation has turned into a top of some sort. It is not lost on me that the ICE Dollar Index (DXY) looks much worse and has already broken below its 200-day moving average, but the euro basically makes up two-thirds of that basket so it is not really a very good gauge of “general” USD strength. However, under 94.00 would certainly be alarming.

I think the upcoming week could end up being significant for USDOLLAR from a timing standpoint as it marks the 61.8% retracement of the time elapsed between the July 2014 low and the April 2015 high. Consolidations like the one the USDOLLAR has been in over the past few months can be incredibly frustrating, but often times the end of these consolidation periods will coincide with a harmonic ratio of the preceding move. As I said above, I have been giving the benefit of the doubt to the uptrend so a move through 12,100 would be seen as very positive (especially after today’s gloomy data) and signal a likely resumption of the broader trend. While not my favored scenario, a break next week of 11,900 would warn a deeper liquidation phase is unfolding.