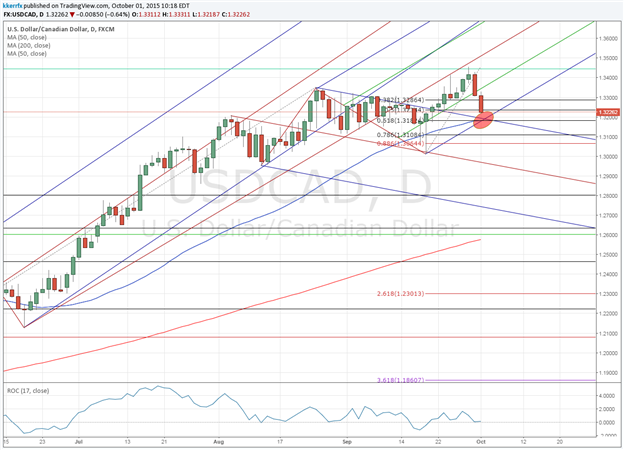 I wrote last week about the importance of 1.3460 in USD/CAD (read HERE). Long story short is that the level is the 61.8% retracement of the all-time high recorded in 2002 and the all-time low recorded in 2007. Big long-term Fibonacci retracements (especially between record highs & lows) are natural points of potential pause for even the strongest of trends. What makes 1.3460 particularly interesting is that it also marks a 48.6% move in percentage terms off that record .9056 low in 2007.

48.6% might not mean a whole lot to a bunch of people, but it is important in the way I look at things as it is a golden mean rhythm ratio. In other words it denotes symmetry. Percentage change is often a forgotten factor of price analysis and more times than not can be the missing link in uncovering hidden order in the marketplace and especially so in currencies. The convergence of this percentage move with the retracement level was a clear sign that 1.3460 in USD/CAD would be significant.

The big question now is just how important Tuesday’s failure at 1.3460 really was? I think we are about to find out. The 1.3225 level is two square roots off of Tuesday’s high and is potential area of support, but the more important pivot zone looks to be around 1.3180/90. In this area there is a confluence of two key pitchfork parallels, the 50-day moving average and the 61.8% retracement of the September range. If this is just a minor correction before turning back up then this is a natural level where the trend should try to reassert itself. Traction under 1.3180 would warn a much more pronounced correction is underway.