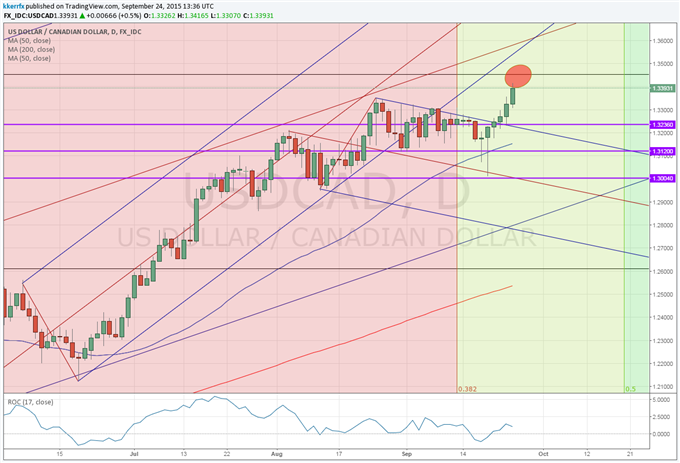 USD/CAD traded north of 1.3400 this morning to an 11-year high. The foundation for this latest burst higher was laid last week after the exchange rate bottomed in the aftermath of the FOMC at the median line of the August range in the 1.3015 area. Subsequent strength saw the upper parallel of the August pitchfork overcome as well which helped further confirm the positive change in behavior in the exchange rate. The daily chart now obviously looks pretty bullish as it should after a breakout from a multi-week range to 11-year highs. However, a few things do warrant some caution and attention here.

The first is the proximity of a big long-term retracement. The 61.8% retracement of the all-time high recorded in January 2002 at 1.6184 (note the Fibonacci relationship) and the all-time low recorded in November of 2007 at .9056 is at 1.3460. Interestingly the percentage move off the low at 1.3460 would be 48.6% which is actually a golden mean rhythm (the 50% percentage move off the low around 1.3585 is also a potentially important resistance). Big long-term retracements such as the 61.8% retracement need to be watched closely as they are zones from where a counter-trend move could easily develop - especially if the market is showing signs of fatigue. There are some minor signs of this which we will get into in a bit, but the positive thing here is the fact that USD/CAD has been in a multi-week consolidation so close to the retracement area. It is difficult for a market to get too overextended when this occurs and the chances of a meaningful turn are probably a lot lower at this long-term resistance because of it.

Some factors that are ominous for USD/CAD here are DSI and momentum. The DSI or Daily Sentiment Index is a daily poll of trend following retail futures traders. It is usually a pretty reliable contrarian indicator whenever it gets above 90% or below 10% bulls in a market. The past couple of days the DSI in CAD fell below 10% bulls for the first time in a while so my antennae are up. Three week momentum or ROC has also been diverging or failing to confirm the move higher since mid-July. Obviously this doesn’t mean it can't just keep going up (as it has been for the last two months), but such a thing is usually not a healthy development and it is the long-term resistance areas where these things often can get exposed. All in all it is difficult to get a read on things here. Given the sentiment picture it wouldn’t surprise me to see a counter-trend move here, but only aggressive weakness back under last week’s low would signal something more important is developing. Traction over 1.3460 on a weekly basis would signal that a more important move higher into the middle of next quarter is probably underway.