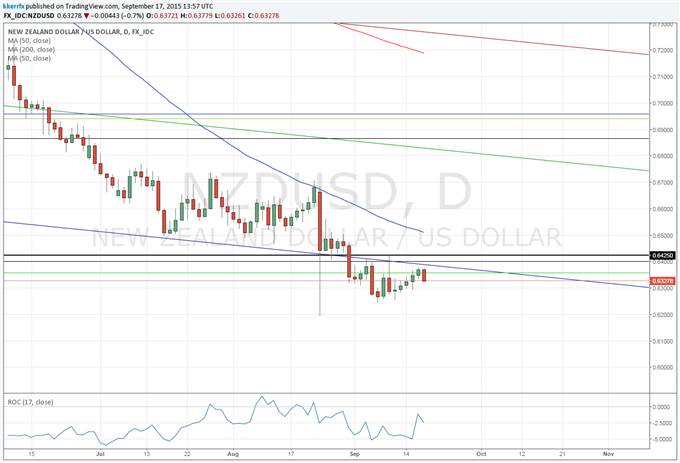 Price & Time: NZD/USD - What to Watch For After The Fed

NZD/USD: Waiting On The Fed

I wrote last week that the bigger picture inflection point for NZD/USD looks to be during the 4th quarter of this year. However, there are plenty of minor cycle relationships to navigate through before then. We seem to be in one of those periods now as last week's low came right on the 161.8% time extension of the internal cycle from the key lows in 2012 and 2013. Last week also marked a fairly clear Fibonacci back count as it was 21 weeks from the July high, 62 weeks from the June 2014 high and 144 weeks from the December 2012 high. The next few days is also another harmonic time relationship related to the 2009 “Global Financial Crisis” low and the 2010 low. That cycle has proven especially important over the years as various geometric relationships from it have led to important turns in the exchange rate since 2010.

The failed support between .6350 and .6425 now looks critical in this regard with traction above this zone needed to signal the start of a recovery of some significance. Failure to get above here within the next few days would favor a continuation lower.