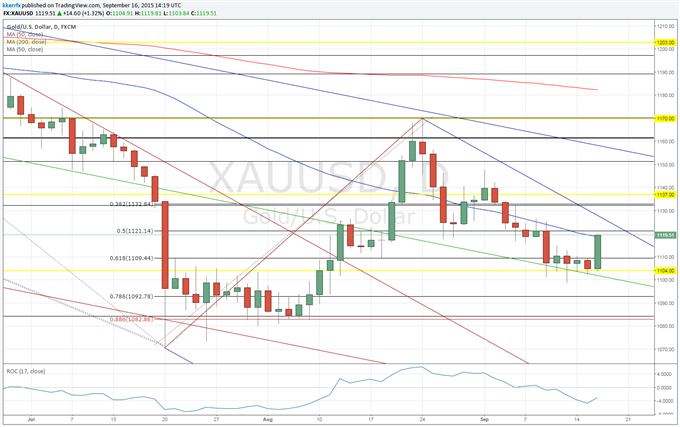 I wrote yesterday (read HERE) about the cyclical set up in a lot of the USD pairs heading into the FOMC decision tomorrow. My cyclical view is basically that continued strength in the greenback heading into the meeting makes the currency generally vulnerable to a reversal. The potential setup extends to several markets outside of foreign exchange as the S&P 500 and Gold look to be on a similar cyclical tack. With respect to equities that would argue they are vulnerable to some sort of secondary high post Fed, while Gold looks poised to turn up (if it already hasn’t).

My issue with them both is how to account for the Labor Day holiday last week. A problem for cyclical analysts that use trading day counts, like myself, has always been how to account for a holiday. The complexity of this dilemma has only gotten worse with the proliferation of electronic trading and the introduction of partial-day sessions on holidays. They say technical/cyclical analysis is often more art than science and this is certainly one of those instances. Short-term timeframes (i.e. less than a day) is a technique used by some, but I generally prefer to just use a little bit of a wider window. Factoring in the extra-time from last week would suggest that how we finish the week is probably more important for both these instruments than the immediate reaction to the Fed.

In the S&P 500 (FXCM CFD), the key topside levels to watch look to be last week’s high around 1995 and above that the area around 2020 as it marks a nice convergence of the 61.8% retracement from the May high and the 127% extension of the range of the past few weeks. If the index is going to stall out this week then I would expect it to do so below 2020. Traction above there especially after Friday would warn something else is going on.

Gold has found support over the past week around the 1st square root relationship of the year’s low around 1104. Today’s sharp bounce suggests that maybe the market is starting up a little ahead of schedule. Any final weakness (if there is any) should probably hold above 1100 and certainly over the 78.6% retracement of the July – August range around 1092. Weakness below there would indicate the burgeoning positive cycle has been invalidated and refocus attention lower in the commodity.