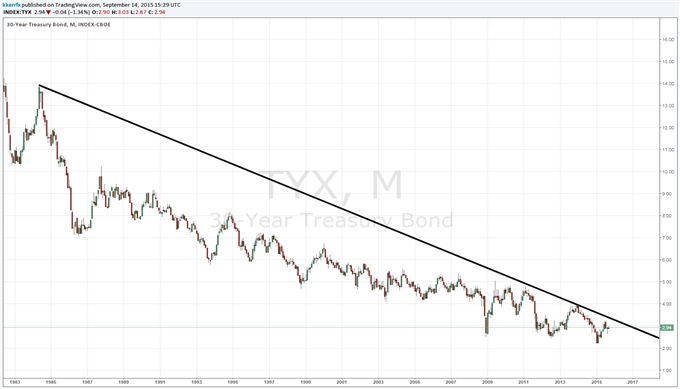 Price & Time: Does The Fed Meeting This Week Really Matter?

Positioning for a rise in rates (historically in Japan, but recently in the US) is often referred to as the “widow maker” trade as premature bets on such an outcome have led to the downfall of many a trader over the years. For this reason I have tried to stay away from prognostications on rates and it has generally served me well. The market’s current obsession with the Fed decision later this week has been almost impossible to ignore and so as they say I have been suckered in to having a view.

As a cyclical analyst I am a firm believer that all markets have a fixed time where movements will run their course. The bull market in US bonds has been going on for well over three decades now and the party looks to me like it is soon coming to an end. From a cyclical standpoint my idealized time to see rates turn up is sometime around the middle of the 1st quarter of next year. It is too early to tell whether that means we get an initial move higher first and then a secondary low around this time or perhaps that ends up just being an absolute low after some crisis? No idea, but I do think we generally start to trend higher next year. Such a view probably makes one think that I don’t agree with the growing consensus for a “one and done” rate hike by the Fed. The truth is I really don’t think the Fed has much to do with it. Interest rates are the price of money or so I was told in my college economics class now almost 20 years ago. The Fed arbitrarily slapping a price on the cost of money all these years has been the backbone of policy, the economy and markets. The rise in rates I foresee will ultimately come from market forces taking back control of the pricing mechanism of the cost of money.

If my view is correct, this will obviously have great implications for all the markets we all trade, but the bond market will be the core of everything. I have written in other pieces (Read HERE) that it is the flow of capital that causes crisis. That is capital gradually moves into a market and assumptions and tendencies then build around it. When capital then leaves abruptly (for whatever reason) is when crisis starts as these long held beliefs are proven false and market participants scramble to adjust to the “new normal”. After a 30+ year bull market in bonds I can only imagine what this will mean for long held beliefs in rates, but just be prepared for these long held beliefs and relationships to change significantly.